Daniel Cabrera, the towering Baltimore Orioles starter, plunked Yankee left fielder Hideki Matsui twice Friday night. The second hit smelled bad. Matsui grimaced in pain both times, but by the time he got to first base he chatted amiably with the voluble Orioles first baseman Kevin Millar. The presidential hopefuls could learn something from Matsui’s grace under fire.

What we seem to have lost in this period of polarization and political deafness is that governing the nation, or a small town, is not about retaliation. It’s not about hits, it’s about runs. It’s not about piling on. It’s not an eye-for-an-eye blood sport, even though Bill Clinton calls it a contact sport. The big sport should get a life instead of playing spoilsport. 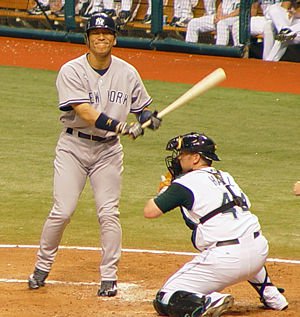 You can disagree, you can convince, you can win, but you don’t have to get down and dirty. You don’t have to pour out of the dugout and clobber someone. The beauty of baseball is its inherent dignity, its grace. It’s not unlike a big game of chess. Americans love it because it embodies their ideals.

True baseball has its steroid scandal, but that doesn’t mean our politicians have to act like they’ve been poppng and shooting steroids.

There’s another way of looking at it. If our politicians treated each other, and by extension the voters, with the ordinary consideration with which most New Yorkers treat each other we would actually have a government that works. Yes, New Yorkers lose it from time to time, but they habitually understand that the only way to inhabit their city is to act as if other people belong there too.

Get it, Washington? Your politicians too often act like they and maybe their party and its lobbyists are the only people who belong there. It happens to belong to all of us, and we’d like it back, if you don’t mind. And even if you do mind.

Djelloul (jeh-lool) Marbrook was born in 1934 in Algiers to a Bedouin father and an American painter. He grew up in Brooklyn, West Islip and Manhattan, New York, where he attended Dwight Preparatory School and Columbia. He then served in the U.S. Navy.

The pioneering Online Originals (U.K.), the only online publisher to receive a Booker nomination, published his novella, Alice Miller’s Room, in 1999. Recent fiction appeared in Prima Materia (Woodstock, NY), vols. I and IV, and Breakfast All Day (London, U.K.).In his younger days his poetry was published in literary journals including Solstice (England) and Beyond Baroque and Phantasm (California). Recent poems appear in Arabesques Literary and Cultural Review (www.arabesquespress.org), Perpetua Mobile (Baltimore), and Attic (Baltimore). He is the English language editor of Arabesques Literary and Cultural Journal (www.arabesquespress.org).

He worked as a reporter for The Providence Journal and as an editor for The Elmira (NY) Star-Gazette, The Baltimore Sun, The Winston-Salem Journal & Sentinel and The Washington Star. Later he worked as executive editor of four small dailies in northeast Ohio and two medium-size dailies in northern New Jersey.