CLEVELAND – Buffalo had too much depth and as they say in coach speak, “They were long in the bench,” as the Bulls overwhelmed Toledo 76-66 in the 2018 Men’s Mid-American Conference Basketball Championship presented by Visit Myrtle Beach. Senior guard Wes Clark from Detroit had the hot hand for the winners, firing in 26 points. He was also named tourney MVP.

Toledo tied it up 63-63 with 4:48 left and then that is when Clark sealed the deal for UB as he hit for a short jumper in the paint and sank two free throws.

This was Buffalo’s third MAC championship in the last four years. Third-year head coach Nate Oats was named the 2018 Mid-American Conference Coach of the Year.

Tre’Shaun Fletcher, Toledo’s star guard was out with an injured knee, which could have played a part in their downfall. It wasn’t to be, and Toledo’s last NCAA appearance remains back in 1980.

It was Buffalo’s night, and well-deserved, as the top seed for the first time in that school’s history. 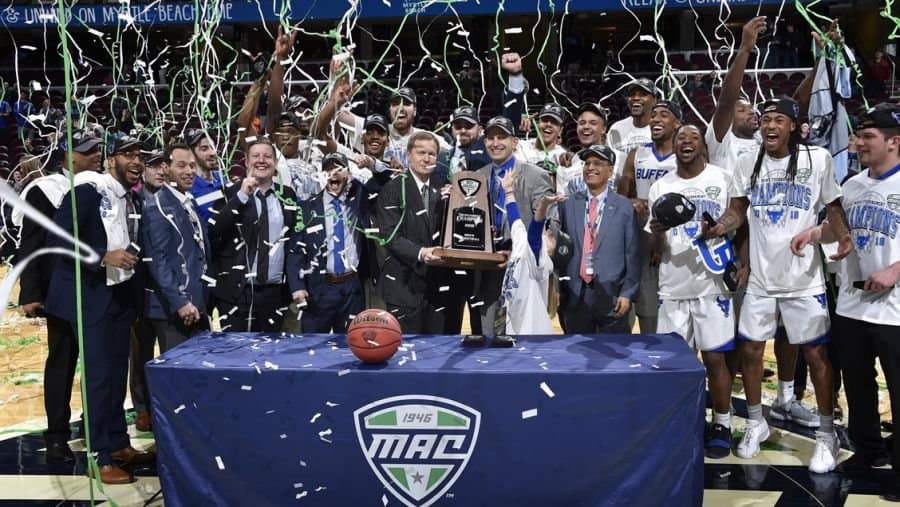 On the previous Friday, Toledo freshman Marreon Jackson, hit a 3-pointer with 6.8-seconds to play and it ended the comeback story for Eastern Michigan, 64-63. It was the Mid-American men’s Basketball Championship semifinal game played at Quicken Loans Arena.

EMU had what they thought was a final chance to win but with less than one second left on the clock, the end of the game was called. EMU were devastated.