Could it be that Hillary Clinton’s alleged crimes during her tenure as secretary of state will finally be investigated? If Washington watchdog organization, Judicial Watch, has its way, the answer is yes. The organization has just obtained thousands of government documents extremely damaging to Clinton.

The documents show mishandling of classified information. It is now a matter of obtaining a copy of the FBI’s lengthy investigation into the former secretary of state.

Tom Fitton, Judicial Watch President, said Tuesday, “Judicial Watch will continue to press for the chart the FBI has been hiding which details possible violations of law by Hillary Clinton.” 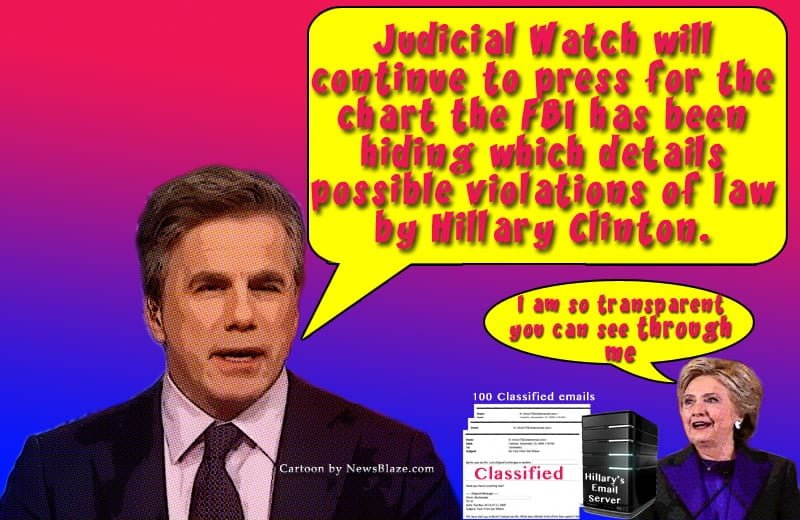 The FBI has the manpower to handle the scope of this probe now they are free of the Russian collusion hoax. To many in Washington, it is ‘open season’ on Clinton.

A Freedom of Information Act lawsuit against the Justice Department for “draft copies of FBI charts containing information on potential ‘statutory violations’ committed by Hillary Clinton in the former secretary of state’s use of a non-secure, non-government email server to conduct government business,” has been filed.

Purportedly, Clinton used a private email server for official government business while she ran the State Department. In July 2016, then-FBI Director James Comey gave a lengthy explanation of why Clinton was exonerated. He surprisingly declined to refer criminal charges to the Justice Department.

Judicial Watch filed their lawsuit in the federal court in Washington after the DOJ failed to respond to a Dec. 3, 2018, FOIA request. They discovered damning evidence through a different lawsuit. JW learned that just days after Comey announced the FBI would not refer charges, the special counsel to the FBI’s executive assistant director in charge of the National Security Branch, whose name is redacted, was producing a “chart of the statutory violations considered during the investigation of Clinton’s server, and the reasons for the recommendation not to prosecute.”

Now it’s the right of the American people to see that chart. Judicial Watch has obtained evidence that the Obama White House knew about the scandal earlier than previously admitted and tried to cover it up as early as December 2012. A senior FBI official, E.W. Priestap, admitted under oath that the bureau found emails sent from Clinton’s unsecured server in President Obama’s executive office in the White House.

Even Comey admitted during his July 2016 press conference that Clinton had been “extremely careless” in her handling of classified information. That now appears to be an understatement. More than 100 emails on her server contained classified information, including 65 emails deemed “Secret” and 22 “Top Secret.” Another 2,093 emails were retroactively marked classified by the State Department.

Now that the media-fueled Russian collusion investigation into Trump has proven to be a hoax, perhaps the real criminals in Washington will have their day in court. You can be sure it will be a long, drawn-out process if Hillary’s lawyers have any say in it.