The war cry that will not go away with the far-left is “impeachment.” They despise Donald Trump and feel the only way to ease the pain of their beloved Hillary losing the 2016 election is to impeach him. The only small problem they have is, for what?

Enter the American people. It would be an understatement to say they have grown sick and tired of one investigation after another that lead nowhere. The Democrats and their far-left faction will not listen. This is their personal agenda and the American people, and this country be damned. They have an agenda, and by God, they will fulfill their hopeless and childish narrative.

A Harvard-Harris poll finds that 65 percent of Americans say Congress should not begin these ridiculous impeachment proceedings against the president. In addition, 60 percent agree with Attorney General William Barr that “the facts and public actions of President Trump did not amount to obstruction of justice, especially since there was no underlying collusion.” 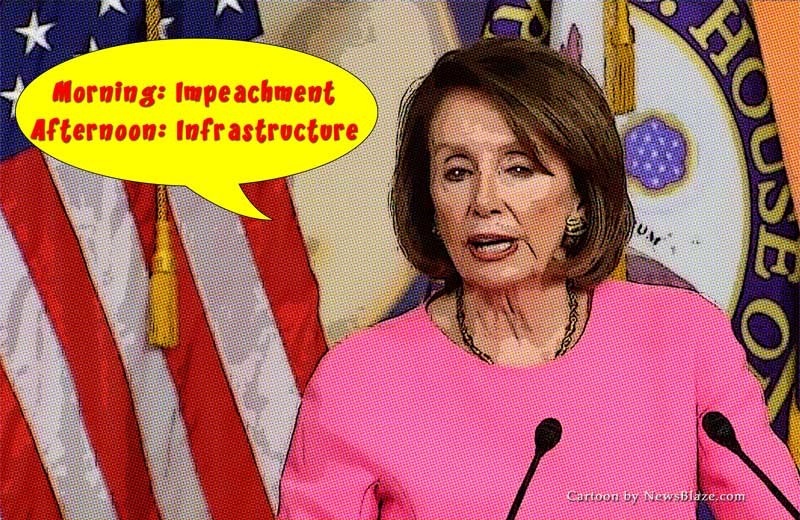 Fifty-eight percent believe that “Given the Mueller Report, we should turn the page on investigations of President Trump.” Could anything be clearer; enough is enough.

Meanwhile, Trump’s job approval rating is 42.9 percent. What does that say? There are millions of Americans who base their disapproval on their personal view of the president since the lowest unemployment in memory and the biggest economy surge in decades certainly didn’t warrant that disapproval.

Does any of this resonate with House Speaker Nancy Pelosi? She is a consummate politician who is attempting to hold various factions of her party together. That is one tough row to hoe considering the far-left’s unrelenting anger. They alone will be the demise of a once-great political party.

Rep. John Yarmuth (D-KY), chairman of the House Budget Committee, declared, “I think there is a growing understanding that an impeachment process is going to be inevitable.” Inevitable to whom and with what charges congressman?

Should a handful of Democrat politicians get their way on this issue, the real danger will not be for Donald Trump. It will be the voters who see this exercise in futility as a huge expense in lieu of actual governing. Since the Democrats regained the majority in the House back in January 2019, virtually nothing has been accomplished other than millions wasted on Trump investigations.

Americans have made it abundantly clear they want their elected representatives to be working on infrastructure, health care and immigration. That is what a whooping 80 percent said in the poll. Democrats have accomplished virtually nothing in five months leading the House. Instead, they choose to make their news with cries for impeachment and investigations daily.

What about the political atmosphere between Nancy Pelosi and Donald Trump? In the early morning hours, she demands an investigation into this or that. By the afternoon she is talking about infrastructure or health care. How is this going to enable the two sides to communicate on anything? It simply will not happen.

What happened to the tens of millions of taxpayer dollars spent on the Russian collusion hoax? Americans want to know and 55 percent of those polled think “bias against President Trump in the FBI played a role in launching investigations.” Fifty-five percent is a lot of angry Americans. Another 61 percent favor “appointing a special counsel to investigate potential abuses in the FBI.”

What is the conclusion of this mess? Democrat politicians have no credibility when they accuse the president of obstruction because the American people know Democrats misled them. One only must see the recent ratings for CNN to realize there are millions in this country who are disgusted with the media’s ‘arrangement’ with the Democratic Party and their daily ‘impeach and investigate’ diatribe.

Democrats are ineffectively attempting to ‘redo’ the Mueller investigation. The results were not what they sought; therefore, they demand never-ending inquiries. Enough is enough. With a total lack of any underlying crime, their incessant cries for this or that ring hollow.

One really interesting thing is that Twitter has become an echo chamber for democrats. The democrats who follow democrats politicians and pundits on twitter appear to be all for impeachment. Real journalists who should know better have been making up bogus Trump tweets and getting their followers to retweet them.

Time reporter Ian Bremmer fooled tens of thousands of followers, including other journalists into believing Trump favored Kim Jong Un for president over Joe Biden. Then tens of thousands of Bremmer’s followers demanded Trump be impeached. The loons apparently know no bounds and that lunacy has infected previously sane democrats.

Pushing the ridiculous call for impeachment is driving the country into the arms of Trump. The Democrats have a huge decision to make and make soon. Either go all-out for impeachment, which has a zero chance of success, or work on bipartisan efforts to solve the country’s problems. In other words, stop investigating and start governing.

The hourglass is almost out of sand. Either get on with it and establish some sort of legislative record, or get your tickets early for Trump’s triumphant second inauguration in January, 2021.