With an unprecedented number of non-family-friendly films nominated for Oscars this year, coupled with liberal John Stewart hosting the show, mainstream America was screaming out for an alternative to the Academy Awards.

Bestselling children’s author Katharine DeBrecht, author of the new book “Help! Mom! Hollywood’s in My Hamper,” heard the screams and has issued her own awards: The “Red Carpet Red States’ Awards” for excellent family-friendly movies, most of which were snubbed by the Academy of Motion Picture Arts and Sciences.

The Red Carpet Red States award for best picture is to be announced on Monday, March 6, 2006.

The promotional poster for the Red States’ Awards features five “Oscars” of their own – Oscar fish, that is, or guppies or cartoon carp or whatever Dr. Seuss was depicting in his classic children’s book. The caption of the poster doubles as the theme of this year’s Red States’ Awards: “One State, Two States, Red States, Blue States.” 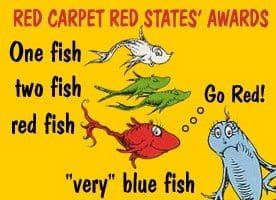 Said DeBrecht, “This year’s Fish theme from a line out of a Dr. Seuss book clearly demonstrates the growing cultural gap between Hollywood and mainstream America and this gap will be on full display in this Sunday night’s Academy Awards ceremony. It’s time for mainstream America to snub ‘Hellywood’ and honor its own best pictures.”

DeBrecht is talking about her picks for the movies that should’ve won Oscars – the Red State Red Carpet honorees – because, she says, “Hollywood has turned its back on America.”

Of this year’s Oscar picks, DeBrecht says “The movies garnering the most nominations included films that are sympathetic towards terrorists, gay cowboys, communist sympathizers, and transexuals. How badly is Hollywood out of touch with mainstream values? None of the best picture nominees were even in the top 20 highest grossing movies of last year!”

“Selecting John Stewart as its host only offers more proof that the Academy has taken a turn to the far left. Stewart uses his show to attack President Bush nightly, and he freely admits he voted for Democrat John Kerry in 2004. He once mocked a Christian guest who was explaining intelligent design, saying he wanted to ‘smoke a bong’ with him. Stewart is hardly a reflection of mainstream America, so in that sense he was the perfect representative for Hollywood.”

“It’s time to roll out the Red State Red Carpet to high quality, family friendly movies that the Oscars snubbed. Forget the gay cowboys – let’s tell Hollywood to take a hike and talk about the movies that were truly the best of 2005.”