It now appears that “Empire” actor Jussie Smollett made up the entire story of being assaulted by mythical attackers who spewed racial slurs and wrapped a noose around his neck. The racist accusations remain.

In a political time of unproven accusations and the word “racist” being thrown around like saying “hello,” these are dangerous politically correct times we live in. One moment of finger-pointing can lead to ruined lives before a shred of evidence is produced.

During the weekend, Chicago Police investigating the alleged racial attack on Smollett now think it was planned by him. CNN reports that two law enforcement sources with knowledge of the investigation spoke to their reporter. They say Chicago Police believe Jussie Smollett paid two men to orchestrate the assault.

The Nigerian brothers had been arrested last Wednesday but were released on Friday for lack of evidence. Chicago Police said there is now “new evidence” and the two men are now cooperating fully with law enforcement. 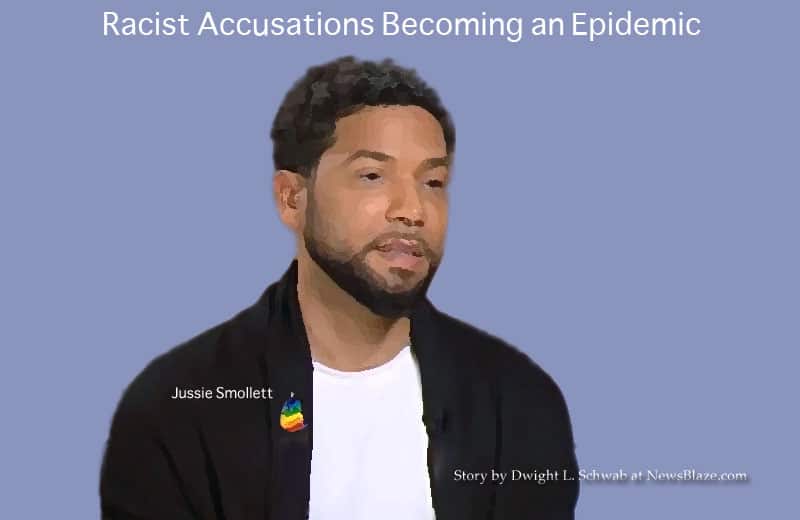 Smollett had earlier told police he was attacked early January 29 by two men who were “yelling out racial and homophobic slurs.” Purportedly, one of the attackers put a noose around his neck and poured an unknown chemical substance on him. The noose (rope) was determined to have been purchased at an Ace Hardware in Chicago.

Smollett’s story began to unravel when he refused to give the police his phone records from the night of “the attack.” No justification was given as to why he would not cooperate with the one piece of evidence that would corroborate his story.

He was consequently interviewed on ABC’s Good Morning America. That did not help his cause since it came off as obvious damage control. He expressed frustration about not being believed by the police.

Smollett told interviewer Robin Roberts, “It feels like if I had said it was a Muslim or a Mexican or someone black I feel like the doubters would have supported me a lot more. And that says a lot about the place where we are as a country right now.”

It turned out the accused assailants were black and are now cooperating fully with Chicago Police. Such racial accusations have become more commonplace in the past few years and reputations and lives have been ruined over trumped-up fantasy. One need look no further than the confirmation hearing of then nominee Brett Kavanaugh to the U.S. Supreme Court.

Smollett Did Not Think It Through

Smollett set up a situation that inflamed political, racial and sexual tensions. The blame was put on Trump Supporters and by inference, Donald Trump. Trump-haters ran with it, even though the story was full of holes almost from the start.

Because of Smollet’s stupidity:

This is a repeat of the story of the boy who cried wolf.

All media that ran with this story until about 48 hours ago when it became an obvious fake should be ashamed of themselves today. Schools of journalism should be looking at their courses to see how they’ve trained generations of unethical dummy journalists and editors. If there had been sufficient integrity in journalism, this story would not have lasted more than a few hours, 24 hours at most. Where were the editors and producers?

After the first 24 hours, editors and journalists should have been querying:

There are so many questions that media organizations cannot hide behind the implausible defense they were tricked for more than a day. The first question anyone should ask when hearing something is “the reasonableness test.”

Given what I know and the evidence I see, does this seem reasonable?

The Jussie Smollett story fails the reasonableness test on many levels. So many that every media outlet should have been all over this like a swarm of ants. But they weren’t. Was that because it was a chance to bash Donald Trump and Trump supporters?

This is exactly how hoaxes work – how they always work.

The racist accusations story was just too juicy to pass up for the hate-Trump entertainment shows that pretend to be media.

It was said early on that Smollett told police the attackers wore MAGA hats and a TMZ report said the police confirmed that on the first day. Now this whole story is being walked back. And even though a CNN contributor denies Smollett said anything about MAGA hats, and says no media reported MAGA hats. The January 29 TMZ story clearly shows it was mentioned and confirmed to them by Chicago police.

To their credit, some outlets like The New York Times published a string of stories showing developments in the case.

This is another example of big TV media looking increasingly like “the enemy of the people,” and they have egg on their face. Even so, nobody should expect them to change until a democrat is in the White House, and then there will be perfect silence, no matter what happens.

As with all hoaxes, Smollett’s baseless racist accusations will stick. People will be citing all the untrue parts of this story for decades. There are very important lessons here. Smollett better hope he hasn’t irreparably destroyed his career due to one stupid decision.