Big city mayors such as San Francisco’s Ed Lee and Chicago’s Rahm Emanuel have been pounding their chests as they vow to fight President-elect Donald Trump on the issue of sanctuary cities. The problem with their political bravado on the left is two-fold; Trump has no political allegiance to big city urban mayors and the practice of aiding and abetting illegal aliens is against federal law.

Trump made it crystal clear last week about his approach to the matter. He re-emphasized the approach he will take in enforcing the nation’s immigration laws, which is much different from the manner of enforcement utilized by President Barack Obama.

Whereas President Obama openly declined to deport the 5 million undocumented immigrants with children born here, Trump has made it known he intends to deport all undocumented people. The idea that there are family relationships will be irrelevant, especially with those who have committed crimes.

It is a fact that big urban cities run by Democratic mayors in locations like New York, Chicago, Los Angeles and San Francisco have not cooperated with ICE and the federal laws governing the deportation of illegals will have no bearing on the president-elect’s plan to end the practice. He obviously has the law on his side. 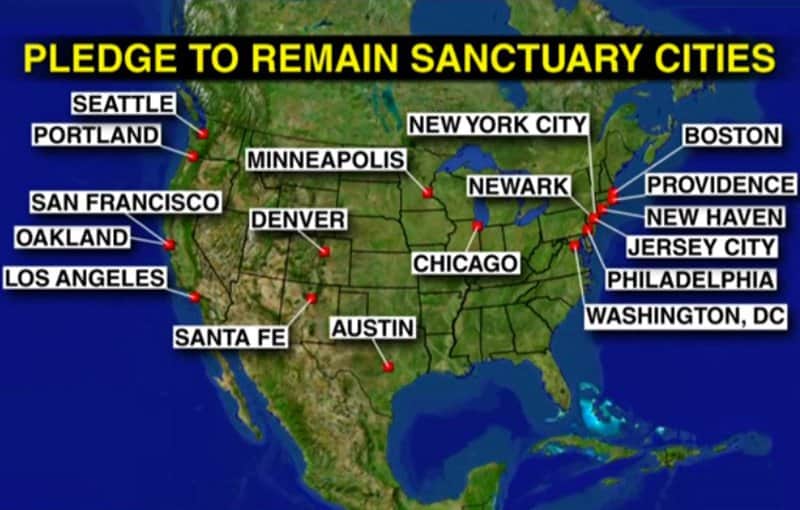 That law would be the Constitution. Donald Trump will be president and the chief federal law enforcement officer in the land. He is sworn to abide by all federal laws. He is vested with what is known as prosecutorial discretion which enables him to place priority on the enforcement of certain federal laws; one being the enforcement of undocumented, non-citizen, non-American residents of the country, period.

With more than 4,000 criminal laws in the United States Code, the political and judiciary branches of the government have cut and run on the sanctuary issue leaving the new president the discretion to act quickly. Earlier this year, the Supreme Court declined to interfere. That means a formal program whereby undocumented people who are the parents of natural-born citizens may lawfully remain here. Because of a lack of resources, the law of the land has been ignored in many cases.

Trump, with a large portion of the electorate backing him in national polls, will now act on sanctuary cities. The urban cities are where large immigrant populations, among which many are undocumented, reside. Despite a loss of public sentiment, they have been beyond federal reach. Trump claims rightfully that these cities must comply with federal law by actively assisting the feds.

These are municipalities that offer expanded social services to the undocumented and decline to help the feds find them. Cities like Chicago are essentially bankrupt and rely on federal largesse in order to remain in the black. The Supreme Court has required the states, including their big cities, to make social services available to everyone resident within them. That can be defined as lawful or unlawful immigration status.

Trump must follow the Constitution to entice the courts to enjoin him as they have his predecessor. He can ask Congress for legislative grants of funds to cities conditioned upon their compliance with certain federal immigration laws. His mission as president is to separate federal powers from Congress and the courts. It is a priority for Trump’s new attorney general, Sen. Jeff Sessions (R-AL). It would appear under this new president that the idea of sanctuary cities is doomed one way or another and the smart mayors know it.