The liberal media becomes more exposed by the day for their utter bias. In an effort to conceal fellow traveler Harvey Weinstein’s harassment towards women, NBC News originally refused to run an explosive story detailing his escapades.

A report on Wednesday cited NBC’s refusal to accept the story of sexual harassment allegations against movie mogul Harvey Weinstein as legitimate. Ronan Farrow, who works as a reporter for NBC News, confirmed he had started the story under the auspices of the network news, but ended up having it published in New Yorker magazine.

Amazingly his comments on ultra-liberal Rachael Maddow’s MSNBC show were not censored. It can be easily assumed “Mad Cow“ is a Harvey Weinstein guru. Asked why the story was published in the magazine, rather than broadcast by the network news department, Farrow said: “You would have to ask NBC and NBC executives about the details.”

Anyone who has not spent the last 20 years on Mars knows that answer. The story does not fit liberal NBC’s profile of men who sexually harass women. That profile would be a white, ultra-rich conservative, Trump-voting male. Otherwise, it never happened.

Ronan, risking his own career at the ultra-biased network added, “I will say that over many years, many news organizations have circled this story and faced a great deal of pressure in doing so. There are now reports emerging publicly about the kind of pressure news organizations have faced. That is real. And in the course of this reporting, I was threatened with a lawsuit personally by Mr. Weinstein.”

That pressure would have come from the Hollywood elite, the Democratic National Party, Hillary Clinton, Barack Obama, Elizabeth Warren and a host of other liberals who do not want the idea of a raving left-winger to coincide with the image of a pervert. Besides, they are all close friends with Weinstein and love his campaign contributions more than his morality.

Variety reported Farrow had been looking into allegations on Weinstein for ten months. But when he showed his early reporting to NBC News executives “he didn’t have one accuser willing to go on the record or identify themselves,” the magazine quoted a person familiar with the situation. However, another unnamed source told Variety that Farrow had strong material.

Anyone who believes that also believes in Santa Claus. They might also be interested in parcels of swamp land in Florida.

But NBC, the worldwide “news organization,” took into account its sister company Universal, dealings with Weinstein and their own heavy DNC connections. You have to think very hard about what President Trump says about the swamp and fake news. This is just further evidence. 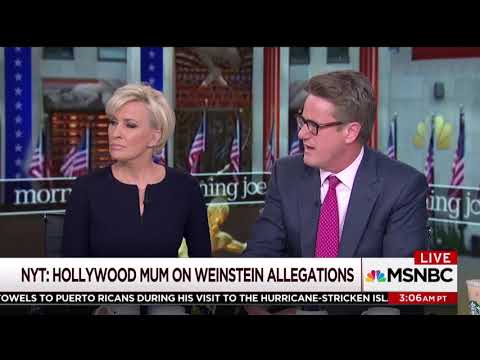