Mister America is a mockumentary that satirizes an aspiring politician. A very rich vein to tap. Unfortunately, however, the politician is hopelessly inadequate, and the lampooning is all too easy.

Tim Heidecker (played by Tim Heidecker) is in the final month of his campaign to become the District Attorney of San Bernadino. He lacks a competent Campaign Manager, volunteers, sponsors and everything else a hopeful needs. He’s also staying at a hotel, as he isn’t in fact a San Bernadino resident. From this lowly landscape, Tim confronts the many obstacles a newbie politician has to deal with. 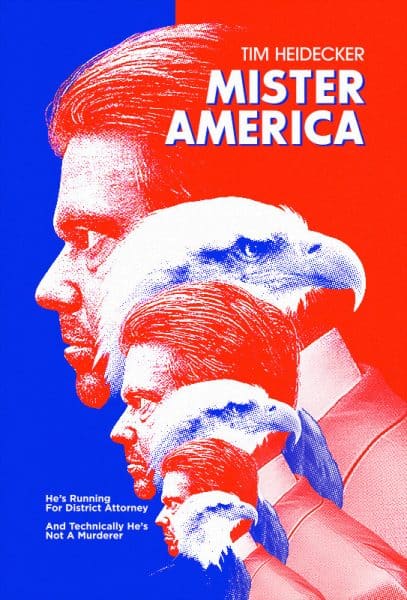 He arrives in San Bernadino alone and isn’t recognized by any of the locals. He’s clearly incompetent, woefully unprepared and not a worthy opponent. And this is where the problem lies. Heidecker doesn’t stand a chance of winning. In fact, no one is even taking him seriously. This doomed scenario might be what the filmmakers were aiming for, but the audience is left with no one to root for. So instead of becoming active participants, we’re merely witnesses, watching a disaster unfold.

Even if Heidecker’s political career did show promise, his scandalous past would quickly douse the first flame. And as if this isn’t enough, he lacks the one credential he needs to be a District Attorney. A law degree.

In fact, the only time he’s made a court appearance is when he defended himself in his own murder trial. The verdict is still mired in controversy, but that doesn’t stop Heidecker lashing out at anyone who doubts his innocence. The fact that he committed fraud to get on the D.A. ballot sheet doesn’t temper his indignation one bit. Such blatant hypocrisy can’t fail to entertain.

Heidecker goes out of his way to not just alienate his audience, but to repulse them. And every scene seems to be saying, “Isn’t this ridiculous?” Perhaps, at the heart of this tale, the filmmakers are telling us we shouldn’t take politics too seriously. Perhaps they’re saying, even though this idiot didn’t succeed, he got in the running. And with such a low bar these days, who knows? If he’d had money, maybe he’d have got to the White House.