If you ever need to look up the definition of the word ‘hypocrite’ in the dictionary, don’t be surprised to see a photo of House Speaker Nancy Pelosi and her smiling comrades. It’s a fit definition for a group that wants to run your life but keep their own lives separate.

Why do I say that?

A story broke on Friday in which the White House and President Trump discussed sending illegal aliens to sanctuary cities. It brought an instant furor from Democratic leadership who have come to the point of considering illegals more important to American society than present-day citizens.

One would think Pelosi and her band of outright hypocrites would embrace such a proposed shift in policy, but no. They described it as Trump “targeting political foes,” according to the Jeff Bezos-owned Washington Post.

For anyone with a half a brain, it is Trump’s way of tweaking the so-called inclusive and politically correct far-left who espouse the virtues of illegals having the basic rights of American citizens. 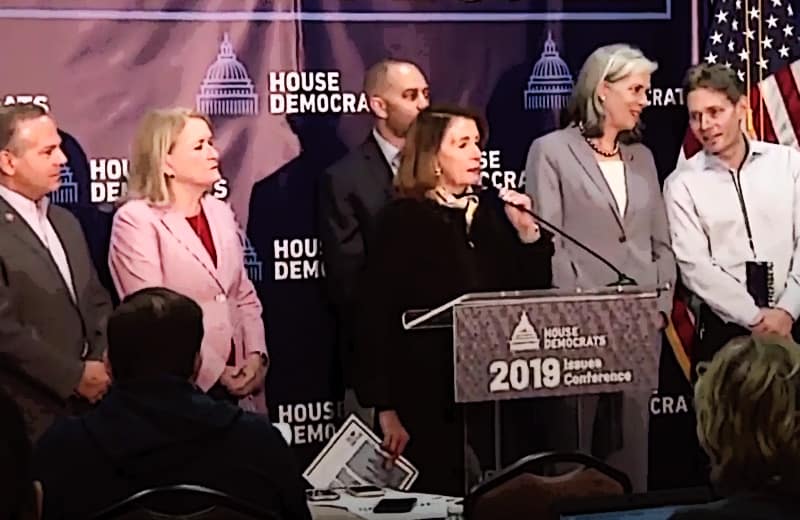 Trump administration officials have proposed transporting detained immigrants to Democrat-controlled sanctuary cities at least twice in the past six months, once in November, as a migrant caravan approached the U.S. southern border, and again in February, amid a standoff with Democrats over funding for Trump’s border wall.

A flustered Nancy Pelosi stuttered out her hypocritical response on Friday saying, “The extent of this administration’s cynicism and cruelty cannot be overstated,” according to Pelosi’s puppet spokeswoman Ashley Etienne. She continued, “Using human beings, including little children (always the children to tug at your heartstrings) as pawns in their warped game to perpetuate fear and demonize immigrants is despicable.”

Pencil-neck Democratic Chairman of the House Intelligence Committee and disgraced Russian collusion conspiracist Adam Schiff threw in his meaningless diatribe on CNN. The miniscule audience was subjected to his rant about how “dangerous” such a policy would be.

These are the same people who called anyone opposing sanctuary cities ‘racists’ repeatedly when they spoke up. They consider these lawbreakers pure as the driven snow and certainly no threat, or God forbid dangerous.

Haven’t we been told for years that illegal immigrants are a net positive? That they commit less crime (total lie), do the dirty jobs you and I won’t do and provide America with the liberal’s favorite buzz word; inclusiveness?

The Democrats profess open borders 24/7 on CNN and MSLSD, not to mention The New York Times, The Washington Post, CBS, ABC and NBC. The president is only suggesting a new immigration policy that adheres to the liberal’s wishes.

The Democratic party believe this nonsense so much that they refuse to do anything to stem the tide. The media believes it so much that they run cover 24 hours coverage a day for lax immigration efforts. CNN’s Jim Acosta once quoted the poem on the statue of liberty asserting that it was our duty to allow illegal immigration.

Yet the Washington Post considers his proposal as “targeting foes.” Huh? This is what they have been seeking all along and the president is giving it to them. Yet Nancy Pelosi doesn’t want illegals in her neighborhood. Gosh, what a surprise when the cards are laid out on the table.

The plain truth is the hypocritical elitists in the Democratic Party don’t want their neighborhoods becoming home to masses of illegal immigrants. They want to hide in their own gated communities and push this flood of human beings on you. Not in Martha’s Vineyard or Pacific Heights/San Francisco, but border towns in Arizona and Texas where the ‘little people’ live.

Why aren’t they gladly requesting buses of illegals into their beloved sanctuary cities? It is what they asked for, so why not? They should be supportive of the President doing this, right?

Obviously wrong. Liberals do not actually want to help these people.

They want them as political pawns to build their shrinking Democratic voter base. They could care less what this will do the economic structure of American society. Their selfish political interests are all that matters.

If you object, you’re a racist; simple as that.