NewsBlaze News
Home USA Politics Is US Weary of Obama?

When America’s ‘first black president’ was elected on the promise of “Hope and Change,” most citizens had at least some hope for much change.

So here the President is, two weeks from yet another inauguration. An older, graying, weary Obama seems as tired of enjoying his election successes as the nation is of government in general.

Inaugural ceremonies have been cut back to less than half of what they were in 2009.

Less people have been invited. There will be no choir on the National Mall. 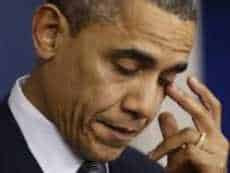 People in Washington are showing definite signs of fatigue with government, those outside the beltway ever more so with U.S. government.

With the economy in the doldrums, the President elected by a very slim margin, unemployment over 22% among young black men, realistically above 11% in general given that the 3 million without jobs, the federal government has labeled the “hopelessly unemployable,” and those who have stopped looking, no longer even counted in national unemployment reports.

“Fatigue” should probably be the subject of the next Obama acceptance speech.