Up until today, I have not broached the subject of the OWS movement other than sharing a video of Chuck Woolery giving his opinion of it. Truth is, I haven’t written much about anything in the last year, because of an ongoing nerve problem I have been dealing. The pain I have been experiencing from a slipped disc in my neck has been so bad at times that I can barely concentrate enough to think, let alone write a post for my blog.

On February 8, I will be having spinal neck surgery that I pray will fix the problem and get me back to writing more frequently than I have been, but I digress. When I think of OWS, my thoughts are very similar to that of my fellow conservatives, and I must admit that Newt Gingrich said it perfectly when he stated at the debate held by NBC in November,

I would like to see someone from the MSM ask a Wall Street occupier, “Who is going to pay for the park you are occupying if there are no businesses making a profit?”

History is full of movements that began with like minded individuals getting together to do something to fix or change whatever it is they are concerned about. The modern day Tea Party movement began when tens of millions of Americans from all walks of life found common ground in their anger over the way Obama and the Democrats were vastly increasing the size and power of the government, while enslaving their descendants to a life of debt. When I look at the people involved with OWS, I only see tens of thousands of communist radicals being worked up into a frenzy by cohorts of the Democrat party. To me, this is not a movement so much as a coordinated campaign by the Democrat party and the MSM to gain support for Obama’s socialist agenda.

Those of the Tea Party were never paid by anyone to attend, they did so on their own dime. It’s been proven that some of those involved with OWS, have been paid to protest. Movements are not started by people who are paid to hold signs, they are started by people who are willing to sacrifice everything. That’s what our founding fathers did, they put it all on the line when they picked a fight with, what was at the time, the most powerful kingdom the world ever saw. So this so-called OWS movement is just another campaign by the Democrat party to convince Americans that the government needs to be even bigger with virtually unlimited power over everything. We even know what the end game for the Democrat party is, because there has been numerous demand lists posted on the official OWS web site.

Now there has yet to be any official vote on these demands, but I understand that there is supposed to be an OWS National General Assembly convention on July 4, 2012. So while those who run the OWS site claim this list is not official, come July 4th we will see how many of these demands get a majority vote from the followers. These demands are so outrageous that some of the demands by occupiers include a demand for free college, and even $20.00 an hour minimum wage, whether a person is employed or not. Which begs the question, with a guaranteed income of $20.00 an hour, why bother with college?

When these lists came to light by conservatives, it was passed around as proof of how these people are a bunch of communist radicals. Also, it must be pointed out that this list of demands and others like it were already in the public domain when Obama and many Democrats, along with such leftist supporters like Michael Moore, Roseanne Barr, Stephen King, Jane Fonda, Al Gore, Alec Baldwin and many other millionaire celebrities who have publicly professed their support for the demands of the so-called 99% OWS protesters. As far as I am concerned, there is no doubt about how far towards communism Obama and the Democrats want to take America, because I have yet to hear them distance themselves from anything the OWS crowd are demanding. Below are just some of the demands being made by those who currently occupy your local park, or downtown sidewalks.

These demands will create so many jobs it will be completely impossible to fill them without an open borders policy.

After this and other lists were posted on the official OWS website, the website moderators put out a warning (screen shot below) to its members to stop posting their demands because they are making them all look like the communist lunatics they are. (my words)

If there is anything about the OWS movement that has not been coordinated by the left, it would be the way the dregs of society have overtaken many of the OWS encampments around the country. However, even when taken into consideration that the lowest common denominator of losers have joined the movement, you just have to look at the list of who’s who of the Democrat big wigs that have officially joined the squatters in solidarity. Many of whom are on record of attacking those of us who are a part of the Tea Party movement.

Considering none of the OWS protesters ever paid for or received an official permit to hold rallies and camp out in public parks, I’m waiting for the Democrats who defended their right not to get permits to help the Tea Party members get reimbursed for the money they spent to purchase permits for their rallies. Also, I find it very telling that the Tea Party members cleaned up after themselves while those of the OWS crowd have not. Which is truly amazing since we are told that the participants of OWS support every environmental issue that has ever been presented by the left, but if you listen to the MSM, it’s the Tea Party that is supposed to be the evil polluters and hateful corruptors of society. Then again, what would you expect from the mouth piece of Democrat party? 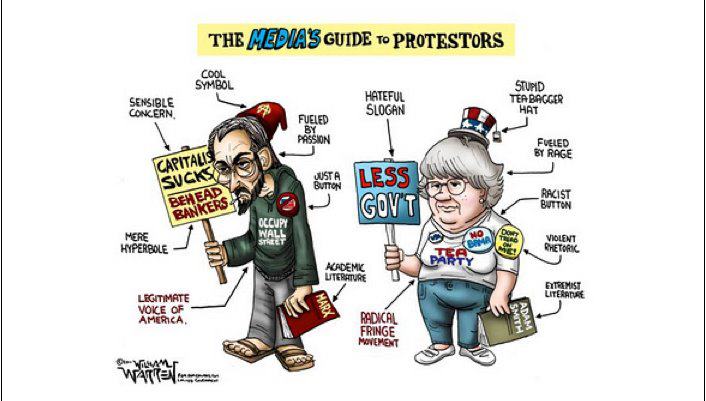 Lately the polls have shown that Americans are getting fed up with those who have been squatting in the parks while demanding everything for nothing, wrecking havoc on society. I think this will backfire on Obama and his cohorts, and come next November they will learn just just how angry Americans are with them. Like the economic numbers Obama has been cooking, this whole OWS is just another tool being used to convince Americans that their fellow citizens want him to be re-elected, so that he will finish the job of turning America into a full fledged Soviet style socialist society.