“I know firsthand… that the American Dream endures… That is why I love this country.” – Michelle Obama, August 25, 2008

On February 18th of this year, Michelle Obama said at a rally in Milwaukee that “For the first time in my adult life, I am really proud of my country, because it feels like hope is finally making a comeback.” Ever since, that quote has haunted her, as the question of her patriotism has remained the subject of speculation by everyone from right-wing pundits and bloggers to the New Yorker Magazine which put a caricature of her on the cover as a wild-eyed, wilder-haired, machine gun-wielding radical in combat fatigues.

Fortunately, on the opening night of the Democratic Convention, Michelle got a national platform to prove all her detractors wrong. And she made the most of that opportunity, passionately delivering a heartfelt speech in which she credited her sacrificing, hard-working parents with her success for having instilled her with traditional Puritanical values.

The spirited 20-minute address, frequently interrupted by applause, deliberately wound its way from her humble roots to her becoming a lawyer and returning to Chicago where she’s remained committed to social causes even after marrying Barack and starting a family. The ostensible aim of these undoubtedly carefully-crafted remarks was to position herself in the mainstream in the eyes of Middle America as opposed to on the lunatic fringe. 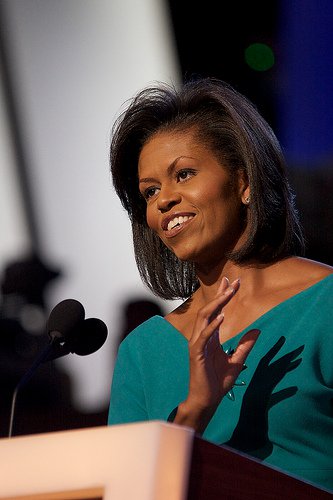 Her words undoubtedly resonated with blacks as a recognizable story of sacrifice and struggle en route to overcoming the odds. More importantly, via the use of catchphrases like “I love this country” and “God bless America,” she probably reached plenty of skeptics and undecideds still sitting on the fence as she related how very grateful she is to have achieved the American Dream.

At the conclusion, the Obamas’ adorable little girls, Natasha and Malia Ann, joining mommy onstage to wave to daddy in Missouri served as the perfect icing on the proverbial cake. Judging by the uniformly-positive, often teary-eyed response from even some former detractors interviewed after the airing, it’s safe to say that Michelle has finally managed to put the loyalty controversy behind her once and for all.

Perhaps the campaign will now finally be allowed to focus on the substantive issues. Afterall, we do still have two wars, runaway inflation, mounting unemployment figures, a sinking dollar, a banking crisis, global warming, the housing market collapse, outsourcing, and a host of other worries to worry about.

Attorney Lloyd Williams is a graduate of the Wharton School and a member of the NJ, NY, CT, PA, MA & US Supreme Court bars.

To read the full text of Michelle Obama’s speech.