Once again the speculation begins about the future of the Prime Minister Gordon Brown, who must have given up wondering if things can get any worse.

The last few weeks must surely have been the worst he has experienced in his political career, what with the MP’s expenses row and numerous resignations.

Hazel Blears is the latest minister to resign, but this was probably not too surprising as Brown almost certainly was going to either fire or demote her in a cabinet shuffle. Blears was angry with the Prime Minister for not giving her the same support other ministers had received over expenses claims.

Blears may not have been Gordon Brown’s greatest fan, but she frequently showed loyalty to the party in defending him when he was under attack. You would think, under the circumstances, that Brown would be keen to hang onto all the supporters he can find.

Gordon Brown faced a potential challenge for the leadership in September last year and managed to survive, but will he be so lucky this time? 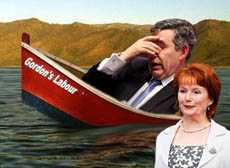 David Cameron, the leader of the Conservative party, has suggested that Brown should step down and a new election be called, but the Conservatives would have a much easier chance of winning an election if Brown remains as the leader.

Those who might replace Brown could be Alan Johnson, David Milliband, James Purnell or Harriet Harman, but it is unlikely that Brown will volunteer to stand aside. Gordon Brown spent many years dreaming of being Prime Minister and he will hang on to the position until he is pushed, or loses in a general election.

At the moment many may see the Conservatives as the only credible party to lead the country out of its present mess, but there are absolutely no guarantees they will do any better.

It is interesting that the UK is following a similar path to that seen in the United States, where the recently elected President impressed voters with his smooth talking and promises of “Change.” David Cameron also has a good way with words, and has also adopted the “Change” slogan.

Unfortunately, it does not seem to matter who we vote for nowadays. The faces and promises may seem different, but the end results are usually the same. Perhaps what we need most of all is not a change of politicians, but a closer look at the system and the people who really run the show!