American politics have made a left turn for the worse. We’ve reached a major tipping point and there’s no turning back. It is now “acceptable” to use curse words as a political speaker, or is it?

Welcome to the Swear Zone. It is a zone of desperation occupied by politicians who face desperate times among America’s electorate. The feeling among those who resort to searing publicly is that it is now chic and the younger generation gravitates to this “hip” way of presenting yourself.

Remember when your parents used to scold you for foul language? People who used obscene words had the vocabulary of an alley cat, uneducated and uncouth. That is not to say anyone of us is perfect in this sense. Most of us can belch a bad word when something drops on our foot or we gain laughs with a profanity to make a joke funnier.

But something entirely different has emerged in American society. Obscenity-laced speeches are now becoming the norm for public speakers to turn your head and listen. Not unlike film and television, which have already shocked us into complacence with obscene language and nudity, we now see it bleeped on national news and other public media.

But now the bleeps are even being removed.

Former Republican candidate Donald Trump and now president is one of the first offenders. But here’s something new: the far left Democrats are jumping deep in the mud with him. Many suffer from post-traumatic shock from Trump’s surprise win over their sure bet candidate, Bernie Sanders, and the afterthought, Hillary Clinton. Like small children who mimic their adult parents, they think such language is acceptable and a winning way to get a point across.

The trend is growing rapidly. Last weekend, with children on stage behind him, Democratic National Committee Chairman Tom Perez leaned right into a microphone and told an audience in Las Vegas that Trump “doesn’t give a shit about health care.” In Portland, Maine, Perez said, “They call it a skinny budget, I call it a shitty budget.”

It doesn’t stop there.

Earlier this month the DNC began hawking a t-shirt that read, “Democrats give a shit about people.” Even Democratic Senator Kristen Gillibrand has gotten into the fray. Speaking of Perez to New York Magazine, she said, “If we’re not helping people, we should go the fuck home.”

This is the Chairman of the Democratic Party and a United States Senator. These are two individuals with highly respected and very public positions in our society. Do they have children? Is this the way they speak to them as they hopefully teach them good behavior and morals?

Their obviously scripted remarks are not without apologists. A spokeswoman for the DNC, Xochitli Hinojosa (who?) offered this explanation for their chairman, “Tom is angry, and he’s angry because Donald Trump continues to stick it to the American people.”

Well then, it’s open season for swearing up a storm, right? That explains everything. Wrong!

There is something skin-crawling about an educated and very public speaker in a position of respect who feels the need to resort to common street language to get a point across. That certainly does not excuse Donald Trump for being the most well-known first offender. But it is obvious since his presidency began that foul language in public has disappeared.

It is more than a bit public knowledge that the far left is in big political trouble. Not only did their candidate, Bernie Sanders, lose big to deceitful Hillary, she lost and their message was turned away.

Now arrives the desperation language to get people’s attention; or does it? If it does, is it resounding in a positive tone to a majority of Americans? Much like Hillary calling half of Trump’s base “deplorable,” is this digging their political hole even deeper?

Researchers on the topic of swearing contend that when you swear, other people process it in the emotion center of the brain. You don’t sound so “scripted” and that makes you seem more authentic and passionate about what you’re saying. Those that use this form of communication feel it helps them bond with people.

Like small children, the idea is such language is unexpectedly useful in fostering human relations. One can get away with things and sometimes that works with … “Like-minded people.” Does that mean you and me?

So is this to say that Perez and Gillibrand assume such language is an acceptable form of communication with the audiences they address? If so, I am part of the viewership watching those remarks and I am offended. I was offended when Trump used foul words in primary debates and elsewhere. I can usually control my mouth with little thinking involved. Is this to say they consider us unprofessional and without proper civilized behavior and we’re fair game?

What does that say about their perception of us? They want to sound like “us?”

I submit that swearing is a distraction from lack of substance. There’s a time and place for bad words, and the place isn’t every time a politician steps up to a live mic. 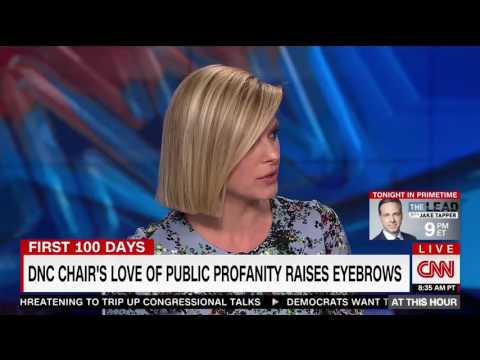