You know that things are going bad for the far left when their chief financier holds up the white flag. New York liberal billionaire donor George Soros has decided to call it a day with his demands for a Trump impeachment. In an interview held on Saturday he said, “Everything that could go wrong has gone wrong.”

Soros is right. President Trump has led the nation to a stunning boost in the economy, Wall Street is reaching record numbers and unemployment is at its lowest percentages in decades. It is great news for the American people and bad news for the ‘resist movement.’

Naturally in his interview with the Washington Post he said Trump would lose in 2020. But the 87-year-old must realize the president is heading toward a crushing victory over any opponent the Democrats could offer at this time.

Not to disappoint with bland comments, Soros added, “Apparently, I was living in my own bubble.” Trump “is willing to destroy the world.” An interview with the far-left socialist would not be complete without outrageous innuendo.

Ironically Soros described Trump as “a narcissist.” That is amusing considering the source. He said Trump “considers himself all-powerful.” Something Soros himself fashions as his own image.

But surprisingly he opposed fellow liberal billionaire Tom Steyer’s impeachment push. He feels there is no way it would work without Republicans involved. But no reasonable thought is spoken without an unreasonable thought right behind it. 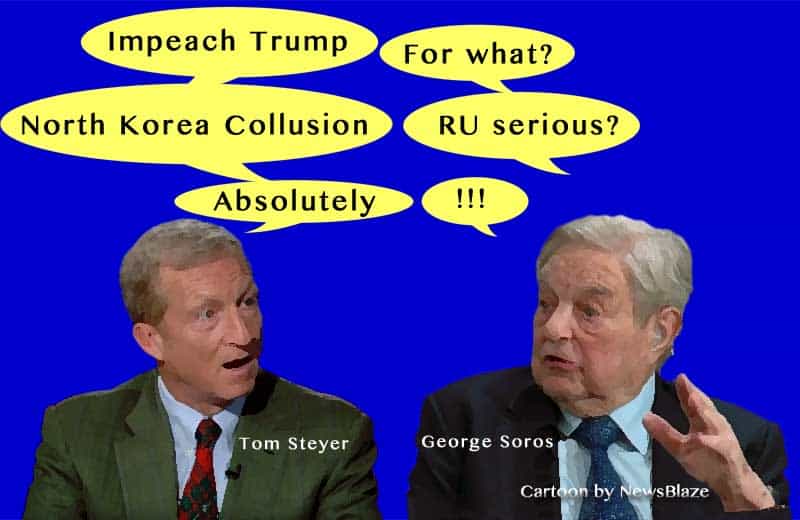 Soros said he would favor impeaching the president “because he is endangering the United States and the world.” He added nothing to substantiate that claim as Trump landed in Singapore to begin talks with North Korea on denuclearizing the Korean Peninsula.

On can only imagine Soros’s heart rate if it is announced later this year that Trump has been nominated for the Nobel Peace Prize. He would probably declare he is leaving the country, as all good liberals do regularly. But that would be hard seeing he doesn’t live here anyway.