NewsBlaze News
Home USA Politics Friday’s White House Briefing: The Briefing You Have When Not Having A...

WASHINGTON – (Newsblaze) The White House today was seeking to deflect attention away from recent troubles with the recent resignation of Chuck Hagel as Secretary of Defense and the appointment of Ash Carter. White House Spokesman Josh Earnest opened Friday’s Daily Press Briefing about the successful launch of NASA’s Orion Space capsule and noting “We’ll have a little Royalty on Monday” with the visit of Prince William.

Earnest then tossed the traditional first question to the Associated Press by saying “Nedra [Pickler] try to follow that up.” However, Pickler, the AP’s White House Correspondent got back on point by saying “Is he looking for a change in direction at the Pentagon?” Earnest responded with a non committal answer, saying “But the challenges that Secretary Hagel has managed quite well are challenges that will endure and will continue to confront this country and the next Secretary of Defense as well.”

The non answers have caused the political world to take notice of the fact that Hagel’s split with the White House hasn’t gone as well as planned, including why Hagel was not at the ceremony announcing Ash Carter’s appointment. The reason given to reporters was “he did not want to distract from an event that was held to honor Mr. Carter”

The events in Ferguson, Missouri also were raised during the Friday briefing, and why the President would be doing an interview with Black Entertainment television. The White House considered it to be “an opportunity to reach an audience that has been closely watching events in Ferguson” and “we would anticipate that the viewers of 106 & Park would have some strong feelings.” 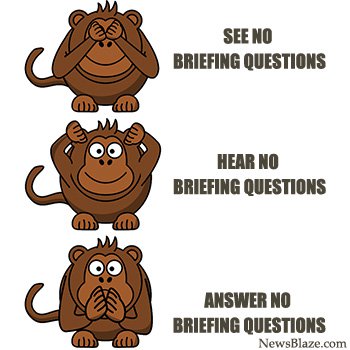 Several other exchanges followed that up in the briefing including one from a UK native journalist who inquired “Do you think it’s time for us to look at and have a review of our justice system and perhaps consider getting rid of the grand jury system?” Earnest’s answer centered on that the reasons were “evidently was something else” and that he was unqualified to talk legal issues but that someone at the Department of Justice could answer the question.

Jonathan Karl of ABC took a shot at the issue as well, by asking the President’s reaction to the Eric Garner video. Garner was killed by asphyxiation in an interchange with police in Long Island New York. Earnest confirmed that the President did see the video but as to answering whether he was shocked he had not spoken to the President on what his feelings were.

In recent briefings, the issue of Press access has come to the attention of the podium in the Brady Press Briefing room. CBS radio’s Mark Knoller inquired about the list of dinner guests that the President had last evening. Knoller is known for being a stickler for statistics about the White House and the Presidency. “It was not a working dinner, this was a social dinner,” was the response, but another reporter protested by saying “Who from the staff? Because that’s – I mean, that’s business”

Also addressed by reporters is this weekend’s Louisiana Senate Runoff, Earnest said “I don’t have anything that the President is planning in the next 24 hours in support of her campaign.”

Josh Earnest will address reporters on Monday in the West Wing.