The depth the politically correct will go in this country is mind-boggling. Americans should not conjure up images of Maxine Waters and Nancy Pelosi as the only far-left hysterical wing nuts this country has to offer.

It was reported Wednesday in the Daily Caller that the Justice Department under President Barack Obama forced the FBI to delete the names of more than 500,000 fugitives with outstanding arrest warrants from a background check database.

This isn’t just some Internet website that reported this problem. This was direct testimony from acting FBI Deputy Director David Bowdich.

Naturally the far left will try to discount this with their fanatical allies at CNN and MSNBC. They will say this has to be some right-wing conspiracy. But these are the same people who blindly follow a former FBI director who lied for Hillary Clinton and another who runs an endless investigation to nowhere on a sitting president. 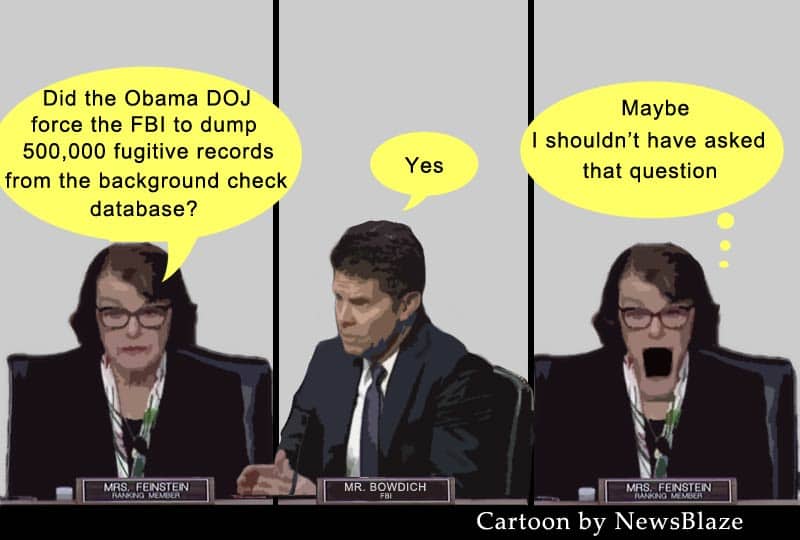 This is America’s law enforcement geniuses at work. Nevertheless, during Barack Obama’s second term, he went with the ATF definition in the broadest of ways possible. Thus, about half a million fugitives were removed from the National Instant Criminal Background Check System.

Some of these sterling individuals may be in your hometown, near your children’s school, whatever. But the politically correct in this country fight for the rights of the criminal over law-abiding, taxpaying citizens.

Bowdich summed it up this way; “That was a decision that was made under the previous administration. It was the Department of Justice’s Office of Legal Counsel that reviewed the law and believed that it needed to be interpreted so that if someone was a fugitive in a state, there had to be indications that they had crossed state lines.”

The far-left have their own political agenda. It includes legitimizing the criminals and illegal aliens in this country. You may ask why that is. It is simple. They are interested in filling their voter base because many of their former supporters have grown older and wiser.

In simpler terms, for first-time readers of this column, I’m talking about their former supporters who are adult voters who have left their parents’ basement, gotten a job, married, had kids, pay taxes and entered the world of real-life and not some encounter group of victims. They have grown wise to Bernie’s idea of free college for everyone, food stamps for the masses and the man who said he would “fundamentally transform America.”

They are ingratiated with the knowledge Hillary Clinton despises them and the left considers them stupid. The trouble is, their ranks swell as fewer get into this country illegally and the criminals stay in jail.