America’s distaste for the far-left’s tactics is beginning to explode. The hysterics of the well-defined “snowflakes” has now come to corporations becoming involved in distancing themselves from what amounts to escalating rude behavior.

Delta Air Lines and Bank of America announced they were withdrawing sponsorship from an off-Broadway production of Shakespeare’s “Julius Caesar,” The New York Times reported Sunday night. The reason has become all too familiar to millions of disgusted Americans.

The play in question simulates the assassination of President Donald Trump. They have “crossed the line,” according to Deadline, an entertainment publication. It is not the first such incident, but rather a trend by the far left to expose the desperate nature of their petty hatred for Trump who defeated their candidate at the last election.

Earlier this month, second-tier comedian Kathy Griffin was depicted holding the severed head of the president in what she termed “a joke.” After enormous pressure on one of her employers, CNN, the news organization reluctantly fired her from an annual appearance on their New Year’s Eve show. The sad part is that it took major public pressure for the cable network that billed itself as “The Most Trusted Name In News,” to recognize the outrageous social behavior.

Speaking with Deadline Sunday evening, a Delta Spokesperson said, “No matter what your political stance may be, the graphic staging of ‘Julius Caesar’ at this summer’s Free Shakespeare in the Park does not reflect Delta Air Lines’ values. Their artistic and creative direction crossed the line on the standards of good taste. We have notified them of our decision to end our sponsorship as the official airline of The Public Theater effective immediately.” 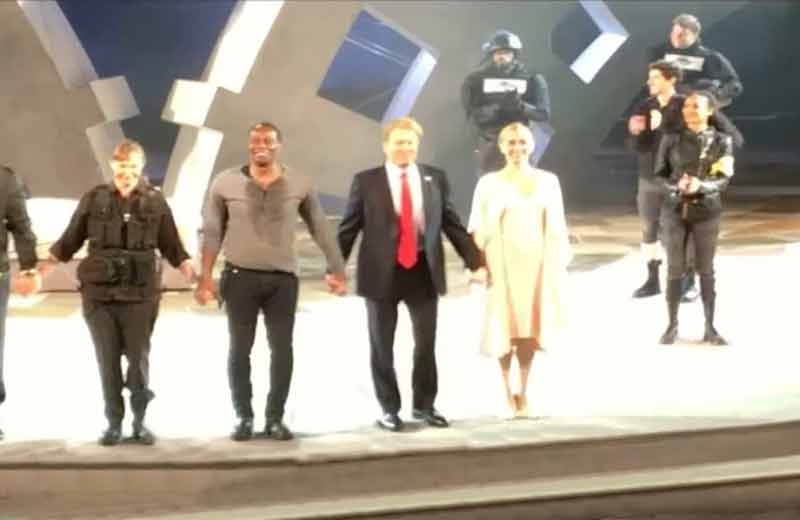 What appear to be the social norms of the far left should be a pressing question for all Americans. Is this actually something the country has grown to accept, or is it a trend by the far left to bully their questionable morality on decent Americans?

The production of the timeless play is a “modern-day depiction of the Shakespeare classic” with the characters of Caesar and his wife Calpurnia looking like the president and first lady Melania Trump. It includes a gory scene where members of the Roman Senate stab Caesar (Trump) to death.

It wasn’t so long ago in this country that such a depiction would lead to arrests. As a country, is this something we are now programmed to accept? Is the fear of being called a variety of names by the left silencing Americans? What would be the reaction of CNN had it been President Obama being depicted?

Delta representatives had been alerted to the inflammatory and highly political situation at their headquarters in Atlanta. According to a spokesperson for the airline, airline executives flew to New York to witness the production. It is produced by New York’s Public Theater and has been playing at the Delacorte Theater in Central Park.

The extreme disrespect for the president and the office unnerved the Delta contingency. The airline recently suffered brand identity problems with a major computer problem last January that left thousands of angry travelers stranded throughout the nation.

There is already a growing anger over public funding of such productions and PBS. Serious questions are beginning to be asked about the definition of “art” among many of the far left’s “creative” endeavors.

Right on the coattails of the Delta announcement, Bank of America withdrew its support of the play. They did not mention ending their 11-year association with the Public Theater, but are rather “looking into it.”

The past year of this continual outrageous behavior has set in motion a new attitude about the liberal far left and their media allies. It may be that a majority of Americans now feel their own morals are being corrupted and their sense of decency is being challenged by individuals who will stop at nothing to bully their ideology upon unwilling participants in their political agenda.

This is a very dangerous gamble as potential voters become fed up and abused by a minority of immature art and entertainment snowflakes. These weak-minded morons have taken up the tactics of the anarchists, who follow no rules of social behavior.

This is an abuse that should push many Americans with a better sense of right and wrong further away. Sadly, many democrat supporters appear to be applauding this bad behavior because it attacks their political enemy.