The Revolutionary Communist Party, which has been building a movement for revolution, announces the unveiling of a Constitution for the New Socialist Republic in North America (Draft Proposal). With this, they are declaring their intention to establish and lead a whole different and far better society.

This Constitution, the introductory note states, is “a basic model…for the nature and functioning of a vastly different society and government than now exists…a real alternative to the present capitalist-imperialist system.” 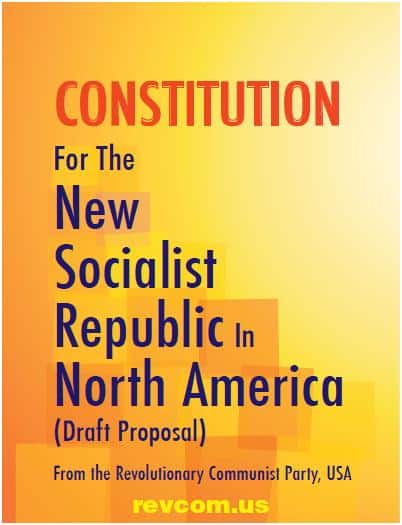 Carl Dix, founding member of the Revolutionary Communist Party, USA, said, “regardless of who is in office, the whole system we now live under is based on exploitation – here and all over the world. No basic change for the better can come about until this system is overturned and replaced. This Constitution is a concrete framework for a radically new economic system, a new political system, and a transition to communism and the emancipation of all of humanity.”

CARL DIX is a founding member of the Revolutionary Communist Party, USA. In 1970 Carl was one of the Fort Lewis 6, six GI’s who refused orders to go to Vietnam. He served two years in Leavenworth Military Penitentiary for the stand. In 1996, Dix was a co-founder of the October 22nd Coalition to Stop Police Brutality. Last year, he was on a campus tour titled, “From Buffalo Soldier to Revolutionary Communist” convincing students not to fight in America’s wars. He recently participated in the second of two major dialogues with Cornel West at Aaron Davis Hall titled, “In the Age of Obama Part 2: Police Terror, Incarceration, No Jobs, Mis-education: What Future for Our Youth?”

Constitution for the New Socialist Republic in North America