Hillary Clinton did her college thesis on Saul Alinsky’s writings while Barack Obama praises him in the first book he wrote. Who was Saul Alinsky you may ask?

Alinsky was a political writer, radical activist and confirmed communist who died on June 12, 1972 at Carmel-by-the-Sea, CA. He espoused the methods to take political control of the U.S. and its political and social process.

The book that started it all was “Rules for Radicals.” It was a sort of road map of how to take control of the country in eight deliberate steps. See if any of these sound familiar in today’s America.

They are healthcare, poverty, debt, gun control, welfare, education, religion and class warfare. It was Alinsky’s theory that if one could achieve domination over these eight fundamental areas; the power was in their hands.

Barack Obama utilized these eight fundamentals and was partially successful with all of the eight steps. But where is the country today with the far left attempting to wield control using these principles?

“In God We Trust” is back in vogue

“In God We Trust” is back in vogue as we celebrate a Judeo-Christian nation at 71 percent. The attempts to prevent use of phrases like “Merry Christmas” have been roundly criticized and the backlash against political correctness appears to be on the rise.

The left’s attempt to transform the healthcare system into one government monolith has apparently failed also. The people are realizing that the law is merely another tax on the middle class and is deteriorating what had been the greatest healthcare in the world for over a century.

Poverty will always be with us, but the rise of the economy and low unemployment are the best weapons against Alinksy’s grab for power using the poor. Upgrading the wealth of the nation with more jobs and tax reform is the answer to the poor revolting. 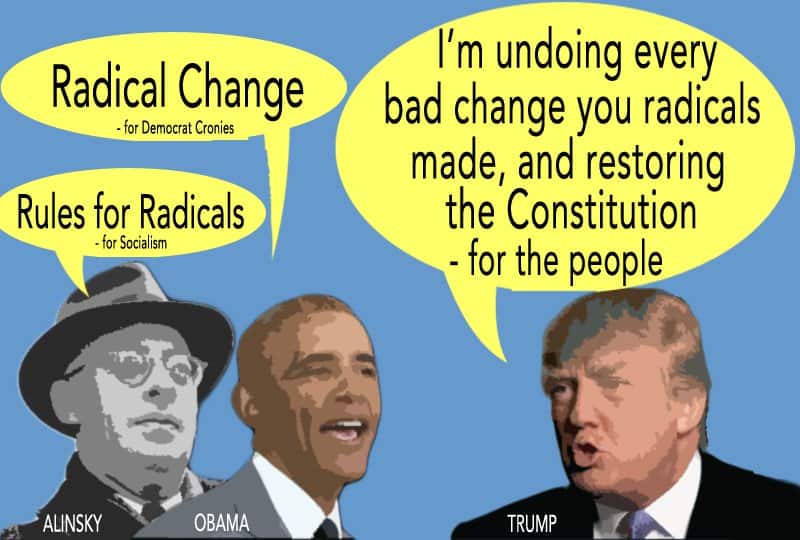 Gun control will always be with us. The idea of sane gun control without taking away the Second Amendment rights of Americans is the key. The installation of federal judges who do not legislate from the bench is essential. That is being done as strict Constitutionalists replace the liberal judges who take the law into their own hands.

The same can be said for the Supreme Court where the appointment of one more conservative justice could lean the court to the right for the next two to three generations.

The welfare state is being more closely regulated. The nation is growing aware of the damage of allowing illegal aliens to freely enter this country. It is ruinous to American workers. Poverty-stricken immigrants with no education or means of supporting themselves are not the type of new citizens this country should allow. That message is now resonating as fact and it is not, as the left says, racist or bigotry.

The nation is realizing the damaging extent of sanctuary cities on the general population. That also includes subsidies to illegals and universal ID’s. Most Americans are becoming favorable to the deportation of criminals and a crackdown on the border.

The more difficult ideology to defeat in the USA and western civilization is the cult called Islam. It is an “old world” view of political domination in the form of a religious guise. With the defeat of the animals known as ISIS, more people realize by the day this is a direct threat to the security of our county that is not racist. Again, the idea of political correctness itself is being scrutinized by more Americans by the day.

This country has always had a small percentage of extreme poverty. There has also been a fractional percentage of mental health issues. It is something the richest country in the world can deal with better than having 20 percent of this country that, like Barack Obama wants to “fundamentally change the country” forever.

Obama’s idea of “change” was the change advocated by Saul Alinsky. For any thinking American, that idea is ominous.

A majority of Americans will look back at 2016 as a watershed year for this country. It was the year a third term of Barack Obama was dodged with the surprise defeat of Hillary Rodham Clinton. As the defeat of Alinksy’s principles pan out under President Donald Trump, many will one day come to realize his election was a miracle.