On May 20, 2013, central Oklahoma was devastated by an EF-5 tornado, the most severe on the enhanced Fujita scale. The Newcastle-Moore tornado killed at least 24 people, injured 377, and affected nearly 33,000 in some way. Early estimates suggest that more then $2 billion in damage was done to public and private property; at least 13,000 structures were destroyed or damaged. It was the deadliest tornado in the United States since an EF-5 event killed 158 people in Joplin, Missouri, in 2011.

On June 2, 2013, the Advanced Space-borne Thermal Emission and Reflection Radiometer (ASTER) on NASA’s Terra satellite observed the scar of that tornado on the Oklahoma landscape. In this false-color image, infrared, red, and green wavelengths of light have been combined to better distinguish between water, vegetation, bare ground, and human developments. Water is blue. Buildings and paved surfaces are blue-gray. Vegetation is red. The tornado track appears as a beige stripe running west to east across this image; the color reveals the lack of vegetation in the wake of the storm. 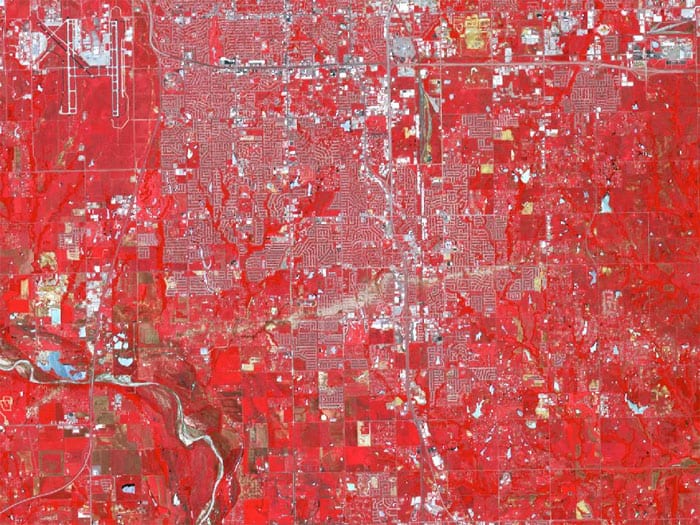 Looking At ‘Debt Clock’ Tells All

The national debt continues to rise because the United States treasury spends more money than it brings in through taxes and fees.

The government actually hit the $16.4 trillion debt limit at the end of last year, but the Treasury Department began using extraordinary measures to help delay default until Congress agreed to suspend the debt limit through May 18. Now the clock looms dead ahead.

The economic system for which Obama strives, requires government to define a “fair shot” for everyone. It includes what the government considers everyone’s “fair share,” and sets the “same rules” under which everyone must play.

Obama wants to spend up to $650 million to improve local-government service delivery, including strategies for climate change and natural disaster responses. This targets cities around the globe – but excludes those in the United States.

All US expenditures are monitored by the U.S. National Debt Clock : Real Time. As can be seen, the debt will pass $17 trillion next week, racking up losses of $1.8 billion/day, or $650 billion/year.

Bathing in Marxist philosophy his entire life, Obama was brought up in a home with a Marxist/atheist mother. He was mentored by a Hawaiian Black nationalist Communist named Frank Marshall Davis, trained as community organizer employing Saul Alinsky Marxist tactics, and attended a church for 20 years headed by Rev. Jeremiah Wright, a Black nationalist despising any capitalism or western civilization.

Socialism and fascism have the assumption that very wise people (themselves), need to refuse decisions from the hands of lesser people (rest of us), and decree those decisions by government ruling. Socialists have a vision of the world, and of themselves as superior beings pursuing superior ends. In the U.S., however, this vision conflicts with a Constitution beginning with, “We the People…”

Obama does not want Americans to remember the fundamental cause for the current economic mess must be laid at the feet of Democrat predecessors who essentially forced banks giving (sub-prime) mortgages to those who could not to repay them. Even worse, ‘FMAE’ and ‘FMAC’ were forced to guarantee these loans, so banks could alter bad mortgages as federally guaranteed securities – easy to insure and sell.

No Real Money From Printing Bills

The Federal Reserve will print money until the “cows come home.” But if others no longer need dollars for cross-border trade, here comes hyperinflation and stagflation. Obamacare expedites this by generating even more suspect liabilities, thereby giving even more excuse to manufacture paper dollars with total abandon. A few months ago, when the economic crisis in Greece exploded, economic determinism lost credibility and the Democrats called it “progressivism,” – the cover name for Marxism. “Progressivism” was actually born after the 1893 financial crisis, which America attempted to solve by redistributing America’s wealth – another anti-capitalist scheme.

A truly bone-chilling video comes from (Retired) Lt. General W. G. (Jerry) Boykin. Entitled “Marxism in America,” General Boykin discusses his background and training in Marxist insurgencies, and how current government actions parallel Marxist tactics. When Obama won by 52% of the fraud-decided vote in 2012, the alleged voters gave us the Obama regime.

From Walter Williams: over half the budget is spent on Medicare, Medicaid, Social Security, and other programs primarily serving senior citizens. More than 80% older than 65 are homeowners, and 66% have no mortgage. The average net worth of people over 65 is ~$230,000, whereas those under 35 is $10,000. The reason – older people live longer. But there’s no standard of fairness justifying taxing earnings of workers who are less wealthy in order to pass them on to retirees who are far wealthier.

Socialism At Its Worst

America is hurtling headlong into a socialist pitfall. The economy is due to crash shortly with the existing administration. The only way out is mass hyperinflation. Obama has tried to ensure Democrat re-election with billions in giveaways. Because illegals vote over 80% Democrat, legalizing them quickly ensures a Democrat win in 2016.

America has two more years, tops, before a communist regime takes over everything. For continued operation as a democratic republic, America must change its leaders and policies immediately.

The Founding Fathers are counting on us.