This is part two of a two-part interview about the current state of politics, the players and what they are doing, or not doing. Francis “Frank” H. Buckley, a Foundation Professor at George Mason University School of Law, has written on issues including constitutional government, the rule of law, laughter and contract theory.

His newest book, The Republic of Virtue: How We Tried to Ban Corruption, Failed, and What we Can Do About It will be published in November 2017 by Encounter Books.

Dwight L. Schwab, Jr. National Political and Foreign Affairs newsblaze.com Columnist – I have the long-held opinion that Pelosi and the liberal Democrats have an agenda concerning the illegal immigration problem and victimization in general. Their main thrust is to get as many of these people into the U.S., provide amnesty and consider the new arrivals to be perspective Democratic Party voters thus looking like the “inclusive” and “tolerant” of our society. Is it your opinion this is the destination they seek?

Professor F. W. Buckley – People are playing politics? There is gambling in “Casablanca?” (Laughter) Every party throughout American history, from the 1790’s on, thought of immigration solely in terms of partisan politics. There is only one exception. Roughly between the Civil War and the 1890’s, they tended to split their votes. The Irish would vote for the Democrats and the Swedes for the Republicans. Apart from that, it was one party or the other.

The party getting the vote was pro-immigrant. For example, it was Republicans who shut down immigration in 1924. It was the Democrats who opened it up in 1965. I don’t get so worked up about DACA. I really get worked up with the 1965 Immigration Act. That is a much bigger issue than the border wall. I think Trump disagrees with that. But I am a big fan of (Arkansas Senator) Tom Cotton’s ‘RAISE Act” that brings some sensibility to our immigration situation. I think that’s the issue.

There is one more thing about the RAISE Act. It would more likely bring people into the country that would add, rather than take away jobs. They would also be more likely to vote Republican. The RAISE Act is about admitting a million people a year. That dwarfs anything else out there.

Schwab – We are talking about something that will bring in educated immigrants rather than potential welfare recipients who will contribute little to the economy, correct?

Buckley – You just look at it in a non-partisan way and ask what we can do better for the immigration situation for the American people. There is no question our current system is nuts. Nobody can really defend the current system. The Canadian system is the best; they pick the best.

Schwab – Again, let’s look into your crystal ball down the road. It is hard enough to define the Republican Party in 2017. But the Democratic Party has no message at all aside from “Hate Trump.”

I look at them as a regional party in the Northeast corridor and the West Coast. Basically between those defined regions, it’s a sea of red. I see after the 2018 elections, Republicans coming with torches and a rope for Mitch McConnell especially.

The Democrats have bundles of money raised by questionable figures like George Soros. They have the Hollywood millionaires and the Northeast elites all contributing heavily. Who do you see as their presidential nominee for 2020? Also, do you see torches and rope for McConnell and possibly Paul Ryan?

Buckley – Mitch McConnell is so devoid of principles. He is someone you can make deals with aside from his commitment to the filibuster. That is the worst thing in the world. I mean when we rant about laws we can’t get rid of, we go directly to the filibuster problem. We control the House and the Senate and it means nothing when you need 60 votes to do anything.

McConnell is wedded to it for all the wrong reasons. Senators get extra clout, so they don’t want to give it up. It’s bad for the country and pretty much everyone knows it. One can only hope Ryan disappears into the Wisconsin mud. (Laughter) I don’t know anyone in the House leadership poised to take away his authority. They are so divided. 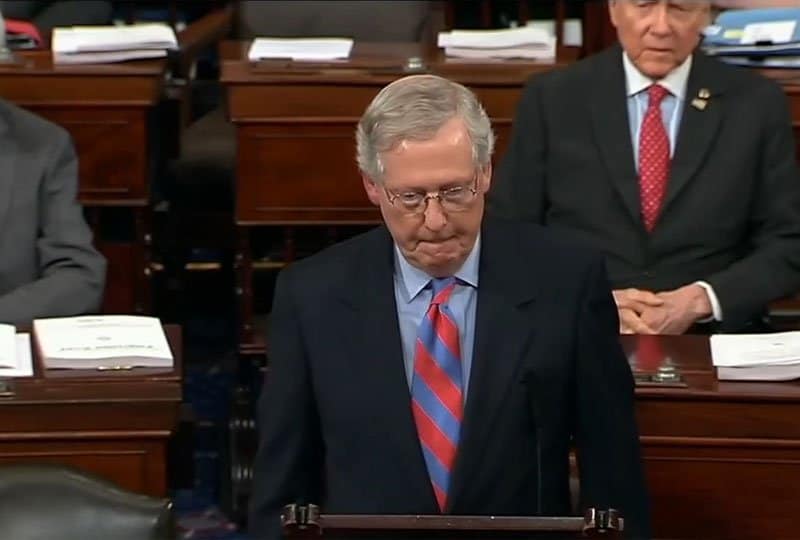 Buckley – The Democrats are so dominated by their base and so different from most Americans. I do not see how they can win a presidential election in 2020. Nothing at all will stop that unless something happens to Trump.

Schwab – Who would replace Trump in your opinion?

Buckley – I don’t think anybody would. No one has the standing to do so.

Schwab – Here we have a bitter, angry Hillary Clinton out with the greatest title of a book I have ever heard of (“What Happened”).

Buckley – (Laughter) What a stupid title for a book. That is what you say when you slip on a banana peel.

Schwab – I think she went cheap on the graphics too. (Laughter) It looks like some textbook you buy for a college course. I will be interested to see how many books she sells. Aside from all that, Hillary has created an environment around herself with even her most ardent media supporters are ridiculing. High ranking Democrats have spoken out about her bizarre behavior. Is she doing lasting damage to the Democrats?

Buckley – Well, she’s doing damage. Not lasting damage. Many of them are so tone-deaf; they don’t get her even now. She has a loyal core of supporters who have no clue about her fallacies. I was debating one of them, Hillary Rosen on CNN, just before the election.

Rosen says, and this is around November 5th, says, “Her secret is how much she’s loved.” (Laughter) For some reason they just don’t get it. That’s wonderful. They are divorced from their base. What is interesting is an odd group of people get it.

Michael Moore, who is a big left wing filmmaker, before the election predicted Trump would win. Van Jones kind of gets it. He said we should figure this out. These are not people who command the same respect in the party like Randi Weingarten of the American Federation of Teachers or the Congressional Black Caucus do. That is the true voice of the Democratic Party and boy is this group hate-filled.

Part of their problem is they cannot communicate love, just hatred. They woke up November 8th and realized they have been expressing contempt for ordinary Americans for years. Somehow they noticed.

Schwab – Add to that the Soros-funded Black Lives Matter and Move-On.org groups among other hate groups, we can go on to a litany of these haters. The American people are being subjected to the day-to-day CNN headlines, hysterical media, MSNBC, Google headlines, etc.

Where do you see the media heading in the future? I come from an advertising background and the ratings of these far left media outlets are dipping into dismal territory. Money will become a key factor in the office towers of the decision-makers. The rumor is AT&T is trying to acquire Time-Warner, but they do not want the CNN portion of that deal. Purportedly, CBS would be interested.

Buckley – The business model you mention is almost dead. Your description is of newspapers back in the day dependent on their subscribers. You only have advertising revenue because you have readership. The New York Daily News was recently sold for one dollar. TIME is basically dead. Newsweek is dead. The Village Voice went dark.

The business model based on capitalism is basically gone. It is now a charitable model. The best example of that is the Washington Post led by new owner Jeff Bezos. It had been failing from loss of readership. Now it is a vehicle for his political views. He was personally attacked by Trump and he is just letting it hang out. The content is shoddy, it is utterly biased. It is embarrassing. People like Bob Woodward are embarrassed. Basically this is what you get with an owner-driven media.

The right-based journals like National Review and Breitbart get their money from their donors. That’s what is going to happen there. Nobody buys a newspaper to propagate moderate views. Newspapers and websites propagate extreme views. We’ll see a further separation of media sources.

Schwab – What is on the horizon for Professor Frank Buckley?

Buckley – I have a book coming out in two months called “The Republic of Virtue.” The subtitle should have been “Essays of Hillary Clinton.” (Laughter) She was the most corrupt political candidate since Arron Burr.

I want to know how it was we got to the point where she was considered a serious candidate. I look at forms of corruption such as judicial politics. Most importantly, the campaign finance issues.

We can make things a whole lot worse by shutting down free speech. I am in favor of no limits to campaign contributions and anonymity when it comes to giving. I am now writing a book about ‘Trumpism.’

Schwab – Who is the publisher?

Buckley – The publisher is Encounter. It will be available on Amazon and Barnes and Noble. You can probably pre-order on Amazon.

Schwab – It is always a pleasure speaking with you.

Francis “Frank” H. Buckley is a Foundation Professor at George Mason University School of Law, where he has taught since 1989. He has written on issues including constitutional government, the rule of law, laughter and contract theory. He is a frequent contributor to The American Spectator and other magazines and newspapers.

His most recent books are The Way Back: Restoring the Promise of America (Encounter Books, April 2016); The Once and Future King (Encounter Books, 2015); The American Illness (ed., Yale 2013); Fair Governance (Oxford 2009); Just Exchange (Routledge 2005); The Morality of Laughter (Michigan 2003); and The Fall and Rise of Freedom of Contract (ed. Duke 1999). His The Republic of Virtue: How We Tried to Ban Corruption, Failed, and What we Can Do About It will be published in November 2017 by Encounter Books. His current project is a book on the themes of the 2016 election.

Buckley lives in Alexandria, Virginia with his wife, Esther. His daughter, Sarah, is a resident at the University of Washington Medical Center.