The bride is the daughter of Jacqueline Baham Taylor of New Orleans and Arnesta W. Taylor, Jr. of Missouri City, Texas. The groom is the son of Mr. & Mrs. Alvin J. Ancar, Sr. of New Orleans.

The bride was escorted by her sons, J.A. Blaine Dejoie, IV of Pensacola, FL and Devon S. Dejoie, of San Diego, CA. The bride’s cousin, Helene J. Derbigny served as matron of honor and the groom’s son, Jody Ancar, served as his father’s best man. The flower girl and ring bearer were Little Miss De’Ana Dejoie of Pensacola, FL, granddaughter of the bride, and her cousin, Master Wayne Wright of New Orleans. 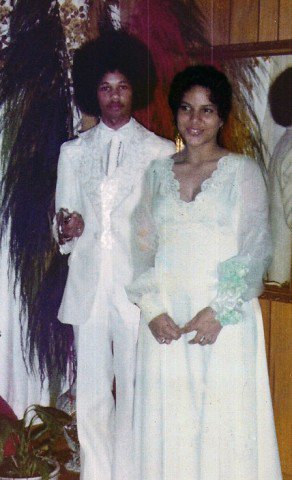 Immediately following the ceremony, guests feasted on a delectable buffet prepared by Vannah B’s and danced the afternoon away to the smooth sounds of Connie & Dwight Fitch.

The bride is a graduate of St. Mary’s Academy and Southern University. She is employed by the Florida Department of Education as a Program Director in the Bureau of Exceptional Education and Student Services, as well as by THE BLACK COLLEGIAN Magazine, based in New Orleans, where she serves as Online Editor. The groom, a graduate of St. Augustine High School and a member of the Electricians’ Union I.B.E.W. Local #130 J.I.T., is an electrician and singer/songwriter.

The couple honeymooned in New Orleans and Pensacola before returning to Tallahassee, Florida where they will make their home.

Here’s the story of how Kathy and Alvin first fell in love, went their separate ways, and finally came together again, this time forever:

At a baseball park on a sunny day

We had a special love sent from above.

High School Sweetheart. We all had them. Some married, only to divorce later. Some were blessed and remained together for the rest of their lives. But how many get the opportunity to reconnect with their high school sweethearts over 31 years later and pick up where they left off a lifetime ago?

New Orleans-based entertainer, Al Ancar, had no idea when he released “High School Sweetheart” on his Hopeless Romantic CD that it would lead to, not only a reunion with the girl he dated in high school, but marriage!

“Kathy remained on my mind and in my heart since we broke up over thirty years ago,” said Ancar. “The song was meant to bring me closure. I had no idea it would bring us back together.”

But that’s exactly what happened.

In January 2009, Kathy, a program director with the Department of Education in Tallahassee, Florida since Hurricane Katrina, heard from her mom via Alvin’s cousin that Alvin had recorded a song about her. A few days later on a trip to New Orleans, Kathy’s cousin confirmed that there was indeed a song titled “High School Sweetheart” on his CD and it was rumored to be about her.

“I was a little annoyed at first,” Kathy admits. “My first thought was, ‘how dare he record a song about me without my permission?'”

But curiosity soon got the best of her and Kathy downloaded “High School Sweetheart” from CDbaby.com/alancar. “Yep. I paid a whopping ninety-eight cents to find out if it really was about me!” she laughs.

“As I listened to the words, I remember smiling and saying, ‘Oh! I remember that!’ or, ‘Wow, I had forgotten that!'” she says, referring to lyrics in the song that talk about, among other things, she and Al’s first meeting and where they went on their first date. 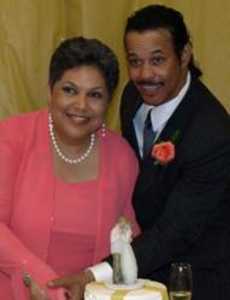 As the song states, they really did meet “at a baseball park on a sunny day” and became inseparable best friends and sweethearts. However, the year following Kathy’s high school graduation, as Al sings, “I started getting much too wild and flirting with the girls,” which they both acknowledge led to their breakup.

“Interestingly enough, I don’t remember ever arguing. Not one time.” Says Al. “She found out I cheated, stopped taking my calls, and within a few months, without saying goodbye, she moved to California. That was the hardest thing to deal with. No official breakup. No closure. Just gone.”

Although he tried over the next couple of years to reconcile via telephone calls and letters, Al’s attempts were futile. “I was angry and hurt,” says Kathy. “It’s one thing for casual boyfriends and girlfriends to have occasional spats, but to be betrayed by my very best friend was, in my mind, unforgivable.”

They later married others, had sons, and divorced, coincidently all within months of each other.

“We learned that we were married the same year, our sons were born within months of each other, and we were divorced within a year of each other,” said Kathy.

But strangely enough, despite having mutual friends and family members, the two never reconnected. Until now.

“I listened to the song over and over for a couple of weeks before building up my courage to call him,” says Kathy. “When he answered the phone, I pretended to be angry. I demanded, ‘who is High School Sweetheart about!?'”

“He was very polite and kept asking for my name. I finally said, ‘this is the person who that song is rumored to be about.”‘

“I was shocked,” says Al. “My first words to her were, ‘before we go any further, please, I have to apologize for being such a jerk in high school.”

When Kathy responded that all was forgiven because “we’re all allowed to be jerks in high school,” all the years melted away and they talked for hours.

Before hanging up the phone, Al asked Kathy for permission to call her again. “I desperately wanted to call her again, but didn’t want to seem pushy, so I figured the best approach was to be polite and respectful.”

It worked because Kathy said yes, and they talked for hours every day without ever running out of interesting conversation.

A couple of weeks later, Kathy made a trip to New Orleans and they planned to meet face to face. Al admits to being apprehensive. “When she opened the door, I was a nervous wreck!”

“I was tickled by how nervous he was! It was a side of him I had never seen before,” says Kathy.

Seeing Kathy again was all Al needed to realize that, although he had written the song for closure, Kathy’s call released all the love he had carried in his heart for so many years, and for him, there was no turning back.

“I sent her a text that night that said, ‘I want to be with you the rest of my life – if you’ll have me back.'”

They talked, texted, and emailed each other day and night for weeks. Shortly thereafter, Al flew to Florida to meet Kathy’s oldest son, Blaine and granddaughter, De’Ana. On a trip to New Orleans she met his son, Jody. They all hit it off instantly. Her second son, Devon, who is in the United States Navy, met Al via email and telephone calls. There was no period of adjustment when they re-met each others’ parents and siblings. “Everyone was so comfortable! It was as if no time had passed,” says Kathy.

According to Alvin’s cousin, “Actually, we all thought that they would end up married with at least four kids, so seeing them back together was exciting for the families.”

“The next step for us was marriage,” says Al. “What were we going to do? Date? We’d done that. God brought us back together after all these years apart, and I wasn’t going to risk losing her again. I was ready to get married right away!”

The only impediment to immediate marriage was that Kathy’s son was on deployment and they didn’t know when he would return. “I couldn’t get married without Devon having met Alvin face-to-face, and without him being there to give me away, but it was so hard trying to plan a wedding with no date!” Until they had a firm date from Devon, they couldn’t lock down a location, caterer, musicians, etc. As soon as Devon informed them of his arrival date, they quickly began planning, and everything fell into place without a hitch.

On August 8, 2009, seven months after Kathy placed that telephone call, as family and friends looked on; her sons walked her down the aisle as Al’s son stood as his best man. There wasn’t a dry eye in the house as she made her entrance.

“We initially wanted a very small gathering with just our parents and sons,” says Kathy. But their families had other plans, and the list quickly grew to over 150 guests, live music, and a catered buffet.

As Al serenaded Kathy with “High School Sweetheart,” Alvin Ancar, Sr. summed up everyone’s feelings saying, “This should have happened over 30 years ago! I’ve never seen my son so happy. I’m so glad Kathy’s back!”