Assistant Secretary Kerri-Ann Jones, at the Bureau of Oceans and International Environmental and Scientific Affairs today announced that President Barack Obama agreed to a U.S. Department of State recommendation to deny the permit application for the Keystone XL Pipeline.

Jones explained that the recommendation was predicated on the fact that the Temporary Payroll Tax Cut Continuation Act that was passed in December does not provide sufficient time to obtain the information they think is necessary to assess whether the project, in its current state, is in the national interest. 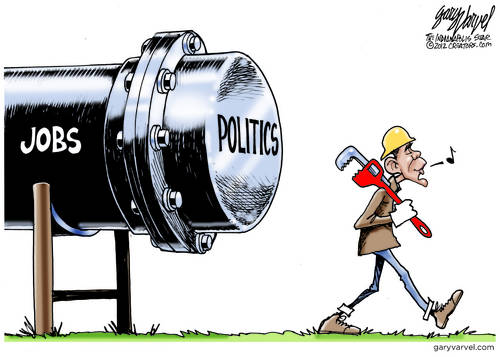 “We made a decision on November 10th that we needed additional information regarding this project, specifically about alternative routes through Nebraska.”

The decision was apparently based on their estimation that there was insufficient time to get essential information needed to make a well-informed decision.

In November, there were discussions about the route of the pipeline, which took it through a sensitive area of Nebraska, that contains, amongst other things, aquifers that supply clean drinking water. TransCanada had eventually agreed to route the pipeline around those areas, after previously saying any rerouting could jeopardize the project.

Environmental groups said at that time, that they don’t trust TransCanada, and that the company will only want to reroute around the most sensitive sand dune areas, not all sandy areas, as the environmentalists want.

The State Department estimated then, that a year was needed to review the project and its documentation.