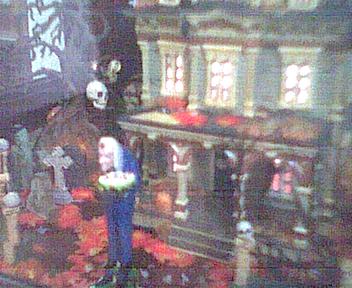 My cousin and I had started a book about a famous ghost light that appears in SE Missouri. I had been planning a trip to the area and purchased an electromagnetic field detector to investigate. According to the professionals, ghosts are balls of energy which can be detected with such a device.

My trip was still a few weeks away and one day my aunt and I were bored. With about an hour before I needed to pick up my daughter up from school, we decided to go investigate at The Arkansas Murder House.

We finally found the place, which was located on several acres. We turned down a narrow lane that was all grown over, leading to the back of the house. I drove slowly, holding my detector out the window as long, spindly tree limbs scraped the side of my truck. We immediately picked up a reading.

We kept driving, turned a curve and there the house was, all in a heap. I assumed the owners had the place torn down to sell the property commercially.

I asked my aunt, who is in her fifties, if she wanted to get out. She said, “If you do.” So I said, “Wait. Let me get the truck ready.” And I proceeded to turn it around, heading it in the out direction, just in case.

We got out and could see where the back door had been. We walked up to it, detector in hand. Nothing. So we decide to leave, get in the truck and started driving back down the long, narrow road when another vehicle starts coming toward us. A cop!

He heads us off. There wasn’t even room enough to pull over. As the officer got out, my aunt said, “Tell him we were trying to go to a garage sale and turned down the wrong street.” I decided to level with him.

He said, “What are ya’ll doing here?” I replied, “You aint going to believe it.” He then looked down in an attempt to stifle a laugh and after regaining his composure said “Probably not, but what are you doing here?” I proudly held up my electomagnetic field detector and said, ” I just got this new electromagnetic field detector and was out here just trying to see if it worked.”

He then looked at me eyeball to eyeball and asked, “What were you trying to detect?” I wasn’t about look at a policeman and say “ghosts.” Instead I smartly replied, “electomagnetic fields.” He frowned and then dropped the bombshell news “Someone burned the place down last week.”

My mouth dropped open as I realized my aunt and I sat there looking like culprits.

As he ran our drivers license, my aunt said, “We could be suspects.” I began to wonder about picking my daughter up in time from school. Especially, if we got hauled in.

Luckily, the officer returned and told us we could go but that he wouldn’t be sticking around if he were us with what all that had been going on. We were ready and willing to leave.

Innocent as we were, as we slunk back onto the main road, people were standing out in front of their places of business , giving us the old evil eye.