The grounds were spectacular for exhibiters and spectators alike and over 10,000 attended. After 32 years of celebrating automobiles, design and fashions at Meadow Brook Hall on the campus of Oakland University, the Concours d’Elegance of America relocated to The Inn at St John’s in Plymouth, Michigan. The 2011 Concours, now on the campus and adjacent golf course of the former Archdiocese of Detroit seminary has a location that offers more space.

The Inn at St John’s has 197 acres of rolling grounds for showcasing the world-class automobiles that traditionally grace the Concours. The convenient hotel at the Inn at St. John’s provides meeting rooms, banquet halls and an adjacent practice golf facility. The building support was perfect for the enrichment seminars for the interested classic auto enthusiasts. Event General Manager, Jim McCarter said, “We had great weather, great volunteers and The Inn at St. John’s, which has a great reputation for fine dining, exceeded expectations.” 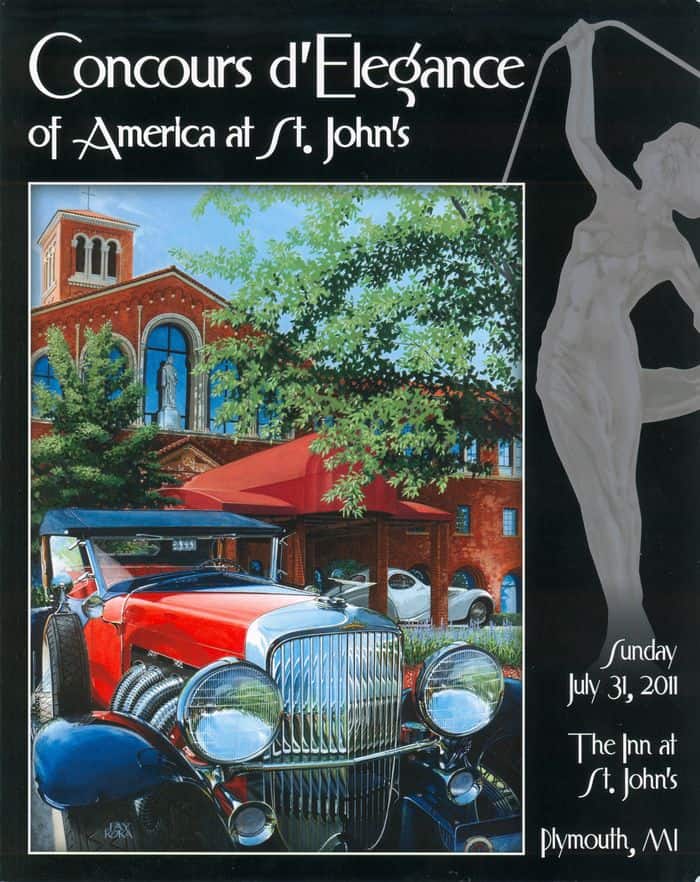 The program book cover and the official poster of the 33rd Concours d’Elegance at the Inn at St. John’s were by world renowned and veteran auto artist Jay Koka. Collectors seek out his auto drawings for the color vibrancy and realism. His original works are collected by private and public audiences worldwide. He has received many Automotive Fine Arts Society awards and the coveted ‘Athena Art Award’ at the Pebble Beach Concours.

One of the visual and hands on displays was the offerings of American Speed Company. The new concept manufactures and fabricates an all-steel 1933 Ford style roadster. The whole design is made special with a folding roof and power side windows which makes it a four season’s car. “So many classic cars are for show only. These are for driving, sort of a living history,” said General Manager, Kevin McLoughlin. “We can put in the engine of your choice if you want real power,” he added.

Mark Trostle, president of American Speed Company was proud to display the purple “Speed 33” in front of the Concours. “This was a custom build with lots of extras, so from start to finish, it goes at about $150,000. It has a custom leather interior, curved windows and stainless window stanchions,” said the former conversion specialist. “The real plus to the convertible is the top that stows under a hard tonneau.”

Cardinal Adam Maida (retired) was a welcoming ambassador as he mingled among the many guests Saturday. “We commissioned some old photos of the ground breaking and the initial building of St. Johns. Cardinal Mooney had great vision in the start of this development.” Another traditional feature of the Concours was the RM Classic Auction of vintage motor cars. At the auction, prices ranged from $23,000 for a Model-A Ford to $57,500 for a Ford Fairlane Sunliner Convertible to $67,500 for Walter Chrysler’s 1931 Imperial with etched windows. A 1930 yellow 16-cylinder Cadillac went for $135,000. Another highlight price was the $676,500 for a 1955 Mercedes-Benz SL Gullwing. The top mark was for a 1932 Packard twin-six custom convertible sedan at $1,100,000.

A very popular part of the Concours is the auto inspired art presentation showcase. One of the spectacular disciplines was displayed by Tony Sikorski of Pittsburg, PA. His art-deco themed mixture of wood and stainless steel highlighted his showcase. “My high school teacher obtained a scholarship for me in graphic arts at the then new ‘Ivy School of Art’ in Pittsburg. My father instilled a passion for the automobile and that was my start,” said Sikorski. He and his wife Carol were recently featured as the cover story in an issue of Automotive Fine Art magazine.

Tom Hale was noticed for having a wide selection of contemporary auto art on display.

Photo artist Jim Haefner had some spectacular posters including a shadowed B&W of the rare Scarab designed by William Stout.

Ron Mihalek got the people’s choice award for a 1940 Lincoln Continental. He said, “It was the 111th one off the line in 1940 and my wife and daughter call it my moving art.”

A special feature of this years show was the presentation of vintage Indy-500 Pace Cars and racing cars on display. The Hagerty Car Valuation seminar and the Design Seminar were well attended on Saturday. The Chevrolet pavilion was very popular with the chronicles of its 100 years of operation. They had a tremendous variety of cars and innovations presented.

Brian Joseph, Chairman of the Selection Committee said, “The more open space allowed us to have a larger field and we were able to do the dedicated Duesenberg display and honor the 100 anniversary of the Indy-500 and the 100th anniversary of Chevrolet. This was a compliment to Detroit.”

For the first time there was a unique display of design elements showcasing scooters and mopeds.