Troops from all of the Victory Base Complex came out to cheer on their favorite stars. Some even waited in line for three hours before the barriers were opened so they could get a ring side view of the action.

John Cena, Chris Jericho, The Big Show and the WWE Divas headlined the Tribute to the Troops Tour.

One happy soldier was Spc. Scott Snow, a Garland, Texas, native, with Company B, Special Troops Battalion, 4th Infantry Division, Multi-National Division – Baghdad. He got there very early, but apparently not early enough. He said, “I got here at 8:15 a.m. and there was already a line.” “I was extremely excited when I heard about this because I grew up watching wrestling with my dad and my friends back home.”

The troops stormed toward the ring when the gates opened at 10 a.m. for a day to enjoy and boost their morale.

“I really appreciate it because they realize we do so much for the country. Then by them coming out here, they support us. It raises a lot of morale for a lot of people and I really enjoy watching,” said Sgt. Molly Stoklosa, a native of Ely, Minn., and part of the 4th Inf. Div. Band. 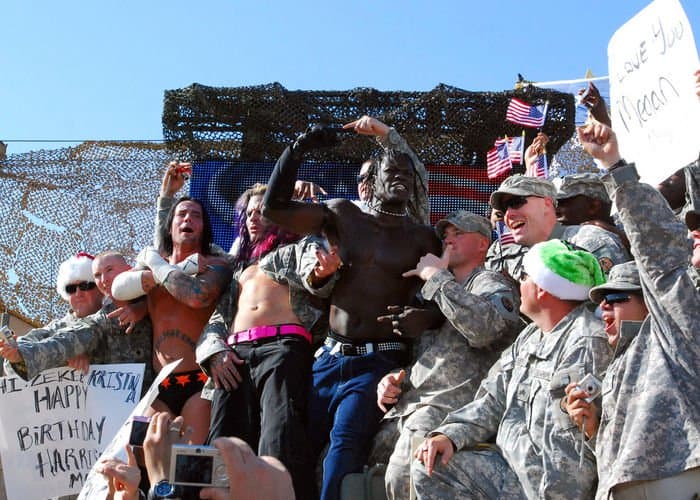 (From left to right) John Morrison, Jeff Hardy and R Truth, World Wrestling Entertainment wrestlers, pose with Soldiers after their fight during the Tribute to the Troops Tour, held in front of the Al Faw Palace. (U.S. Army photo by Spc. Benjamin Crane, MNDB PAO)

Spc. Jerry Ewell was one of the soldiers that decided it was a good opportunity to rededicate his service to his county and see his favorite wrestlers at the same time.

“I want to make the Army a career,” said Ewell, an Idaho native, who serves with the Special Troops Battalion 2nd Brigade, 1st Inf. Div., MND-B. He talked to his retention NCO and was told he could be ringside when he was sworn in.

“My favorite wrestler is John Cena and I really hope to meet him,” said Ewell. “He knows what the troops are like because his dad was a Marine.”

Whether or not Ewell got the chance to meet Cena is a mystery, but most likely he was thrilled when at the end of the show Cena proudly held his championship belt over his head and paid a special tribute to the service members.

“This vacation means a lot to me and it means a lot to spend it with you guys. I am surrounded by the most disciplined, courageous unbelievable bunch in the universe and I am proud of each and every one of you,” he yelled to the crowd as they threw their hands in the air and cheered in unison.

This is the sixth year the WWE wrestlers have volunteered to perform for the troops in Iraq and according to Vince McMahon, chairman and promoter of the WWE, it certainly won’t be the last.

“All of our performers want to come year after year. It’s an extraordinary personal experience for them to be able to interact with our Armed Forces,” McMahon said. “It’s the biggest event we do all year, bigger than Wrestle Mania. We get more out of it than any other event. It’s the least we can do as patriots; to come over here and show some appreciation for all of the good work these men and women do.”

Wrestler and entertainer, The Big Show, has been coming to Iraq since 2003 and personally continues to come back each year because of the feeling he gets when he’s around Soldiers.

“I know we are supposed to be a big morale booster for the Soldiers, but I find myself being inspired when we come over here,” said The Big Show. “I love everything about the Armed Forces and I’m a proud American.”

Over two months ago Maj. Michael McGregor, a Roaring Springs, Penn. native, deputy of personnel office with 4th Inf. Div, MND-B, was appointed as officer in-charge of coordination and planning for the event.

“We met with the set design staff, who came over before time and gave us a layout of how the venue would work,” said McGregor. “When the staff landed they just needed to add the finishing touch.”

But McGregor said, it’s not the set design or the venue layout that make the event so significant each year. It’s the unique opportunity service members in theater have to meet and see people they may not otherwise have the opportunity to see.

“WWE wrestlers are larger than life to most of our Soldiers, so they carry a certain amount of mystery or amazement for people,” said McGregor.

“When you go to a concert in the United States the entertainers don’t do a meet and great after the show where everyone gets an autograph, but they do here because they are appreciative of what the Soldiers do for them and our country,” he said. “I don’t think these entertainers realize that for some, this is a dream come true.”