“If there is anything such as hell on earth, it was that moment,” said the grey-haired, 90-year-old man at the front of the room. The hell on earth the old man, James Megellas, was talking about is a thing of legend, something one sees in movies. It can be seen in one movie in particular, “A Bridge Too Far.”

Megellas, who is a retired lieutenant colonel from the 82nd Airborne Division, came to Afghanistan to visit the troops and, during his stay, gave a class here to staff members from Combined Joint Task Force-82, Dec. 24.

The class focused on leadership in combat, a skill Megellas acquired during World War II. But, the class was more than a lecture, it was Megellas’ story, a part of his life.

His hell on earth took place as he acquired his skills as a combat leader. 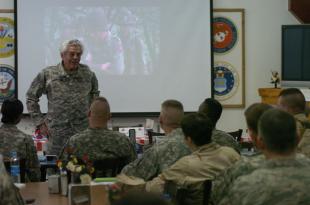 With the Red Devils, who were British paratroopers, trapped behind enemy lines in Arnhem, Holland, the 82nd was tasked with capturing a key bridge on the Waal River near Nijmegen, Holland.

Elements of the 504th crossed the Waal River in boats during the middle of the day to capture the bridge. As paratroopers, Megellas said “paddling across a river was never part of our repertoire.” 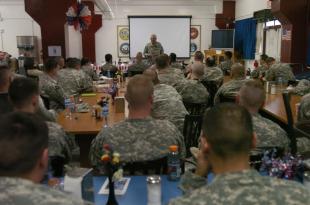 Under a barrage of small-arm, machine gun and indirect fire, the “Devils in Baggy Pants” made the crossing.

Megellas told this story to the gathered staff officers and non-commissioned officers. His point was the effectiveness of leaders.

As the paratroopers landed on the other side of the river, they were faced with 500-800 yards of open, flat land before their objective, which was a dike. 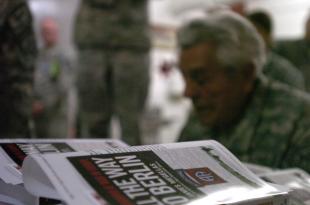 A plan was in place for the landing. The paratroopers would reorganize at the dike and follow-on with their mission. There was a problem though, the men, who belonged to different companies, became too intermixed and conditions did not allow for reorganization.

Megellas said to stay at the dam and reorganize would have been “idiotic.”

Men, considered to be at the bottom of the chain of command, took charge and made “decisive” decisions, the veteran said. Platoon leaders and squad leaders charged over the dike and accomplished their mission by securing the bridge. 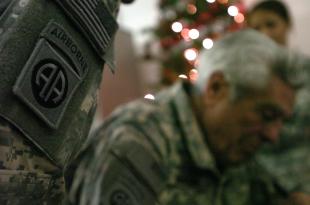 Soldiers from the British army were to push forward to Arnhem but a lack of orders from their command brought them to a halt in Nijmegen. By the time they received their orders, Operation Market Garden was a failure. The British took too long to reach their airborne brethren. Almost 8,000 British paratroopers were lost at Arnhem.

The man, who served as a platoon leader throughout World War II in the 504, made his point.

“Leadership is required at every level,” he said. “Gen. (James) Gavin could never have accomplished anything without his troopers.”

“You don’t accomplish your objective without leaders,” Megellas said.

His lesson was simple: good leadership is needed at the very top, and, also the bottom.

“Paratroopers, if properly led would follow you to the gates of hell if asked,” Megellas said.

The retired lieutenant colonel had his time in hell. This is the second time he came to Afghanistan to visit paratroopers who are having their time in hell.