“Blackdeath 28 this is Wings 06, I know you are in contact but out of station time and crew day. I have a Scout Weapons Team armed with Rocket, .50 Cal and Hellfire postured 2 miles east of Biaj requesting a SITREP and battle handover.”

Sounds like an ordinary radio call from a scout weapons team in combat; however, the crew was a unique mix from the 25th Combat Aviation Brigade (CAB) deployed to Operation Iraqi Freedom (OIF), Multi National Division – North. The crew was composed of the 25th CAB Commander, Col. A.T. Ball, Wings 06, and Chief Warrant Officer Four Clint Logwood from the Aviation Technical Test Center (ATTC), unique due to the fact that both aviators are Experimental Test Pilots (XPs). An all XP crew, performing multiple combat missions together – this was a first in Army Aviation.

Mr. Clint Logwood is embedded with the 25th CAB as part of the Army Test and Evaluation Command’s Forward Operational Assessment Team. ATTC sends XPs for combat rotations to offer near and long term benefits for the development and fielding of combat systems supporting our aviation war fighters in support of the Global War on Terrorism. XPs have provided significant direct support to their hosting units. They are primarily an in-house liaison representing the testing and acquisition communities, but in the 25th CAB, also serve as the force modification officer. In their primary capacity, they serve as a direct link to facilitate communications with Aviation Program Managers, the Aviation Engineering Directorate, and equipment manufactures.

Embedded XPs in combat formations have existed since January 2005 when an ATTC XP deployed to OIF as part of the AH-64D Lot 8, Common Missile Warning System (CMWS), Blue Force Tracker and Modernized Target Acquisition and Designation Sight (MTADS) fielding. XPs represent a low density, highly skilled resource within the testing community and offer unique benefits to the unit and Army Aviation when made available to a CAB Commander. The value added of having an XP to the CAB is not only possessing a subject matter expert armed with multiple tools in his kit bag, they are also highly experienced aviators as well. Some of them are senior Warrant Officers, with a background as Standardization Instructor Pilots (SIP) or Maintenance Officers. Some are Commissioned Officers with a distinguished operational or maintenance background and knowledge of Army level processes which are not normally resident at the Brigade level. They depart the testing community for six months periods from programs like the UH-60M, CH-47F or AH-64D Block III in an effort to ensure newly designed aircraft, weapons and systems are best tailored to meet the war fighter’s collective needs for the current fight and for future operations.

XPs have provided significant direct support to their hosting units while serving the CAB as a special staff officer. A primary task of the Combat Aviation Brigade XP position is to conduct detailed formal interviews with operational crews and maintainers on a non-intrusive basis to provide effective feedback to product managers and Aviation Engineering Directorate. They must be the resident expert and conduit for all acquisition and airworthiness issues. They should progress and fly as an experienced crewmember to assist the CAB and gain first-hand knowledge of combat employment tactics, techniques, and procedures (TTPs). Assigned XPs often collect data on evaluated systems for use in the Army’s test and evaluation processes. They will provide formal feedback and recommendations to product managers for modifications and procurements of subsequent aircraft and subsystem variants while also assisting the CAB in their overall mission accomplishment. Additionally, they will communicate findings and TTPs to the Aviation Technical Test Center for relativity within test methodology. When not performing these specified duties, they may augment the Aviation Brigade in additional capacities as dictated by the Commander.

The rapid fielding of Mission Equipment Packages and constant Modification Work Orders applied to our aircraft necessitate having XPs assigned to the CAB to insure all acquisition and airworthiness issues within CAB are resolved quickly for continued combat effectiveness. They will ensure deficiencies are corrected and improvements are made to subsequent aircraft and subsystems based on combat experience and feedback from direct involvement with the supported unit. Thanks to their reach back into the test community, they can inform ATTC with results from the testing and development of new systems which better represent the concerns of operational pilots, especially regarding TTP and operational employment considerations. Their tasks, when successfully completed, can greatly accelerate product development and product improvement.

Since our deployment to OIF 06-08, there have been three XPs attached to the 25th CAB: MAJ Todd Buhr, MAJ Dan Bailey and CW4 Clint Logwood. While attached, they have accumulated over 750 combat flight hours while flying multiple aircraft and their accomplishments have assisted the 25th CAB in our overall mission success. They also provided the Department of the Army a way to conduct developmental testing within the combat theater. For example, they worked to add Viper Strike and the communication relay package to the Hunter Unmanned Aerial Vehicle (UAV), new starting procedures for the UH-60 Aircraft and the addition of the One System Remote Video Terminal (OSRVT) to the Airborne Command and Control System. Their work indirectly affects ground commanders as well. The OSRVT for instance allows the ground commander to receive a direct UAV feed displayed on console monitors, helping the ground commander improve his situational awareness while conducting combat missions. Additionally, the CAB XPs have been instrumental in assisting and identifying operational needs not only for the CAB, but for the Corps and MNF-I as well. Aircraft systems upgrades which these dedicated professionals assisted in the 25th CAB include the following: 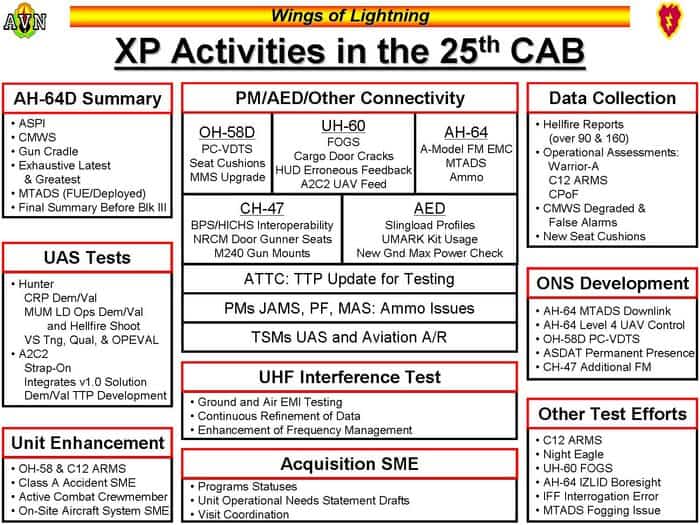