The government of Iraq not only abducted men and women from the ironically named “Camp Liberty,” they also killed them and then secretly buried them. Responsibility for all of this lies with Iraq’s Prime Minister, Nouri al-Maliki.

In August last year, there were warning that Iranian Qods Force, collaborating with the puppet Government of Iraq, was preparing for yet another attack on the camp and the people within. Those people, designated as “protected persons,” being under the protection of the United Nations have been abandoned by the United Nations, and the USA. Although they know all about this, the UK and EU have been silent.

In Qods Force On Mission to Attack Camp Liberty, it was reported “According to reports received from inside Iran, Khamenei has tasked the Qods Force to organize further missile attacks against Iranian refugees, members of PMOI, in Camp Liberty.”

The camp was subsequently attacked on 1 September 2013, and hostages were taken. Nouri Al-Maliki Responsible for Whereabouts of Camp Ashraf Hostages

This story reminded the UN and US of the obligations they have completely ignored: “Recalling the direct responsibility of the U.S. government and UN regarding the safety and security of the hostages and emphasizing that silence in the face of crimes against humanity and state kidnapping is a disgrace for contemporary humanity.”

It has now been discovered that there was a secret burial of 52 Ashraf victims by the Government of Iraq (GoI). British parliamentarians say “There can be no doubt that this mass and secret burial was aimed at concealing the complicity of the government of Iraq in the massacre of 52 defenceless and unarmed civilians.” They are calling for this incident to be referred to the International Criminal Court. 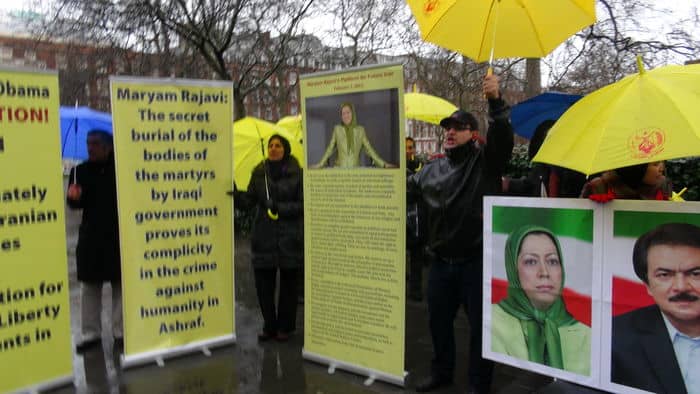 The International Parliamentary Campaign in Defence of Ashraf and Liberty (IPCDA) issued the following press release.

In an act of pure cowardice, the government of Iraq has secretly buried the bodies of 52 massacred Camp Ashraf residents, slain during the 1 September 2013 massacre at the camp in Iraq. A total of 52 men and women were executed on 1 September by an Iraqi SWAT team who entered Camp Ashraf at the behest of the Iranian regime, to execute the camps residents. Many of the victims were executed with their hands tied behind their backs, others while receiving treatment in the camps medical centre.

More than five months after this crime against humanity, in a meeting on 11 February, a representative of the government of Iraq has confirmed the burial, without diverging where or when the burials took place. The bodies of the 52 men and women has been buried in an unmarked location, without the knowledge of United Nations personnel or the families or loved ones of the massacred 52. In contravention of international norms and practices and further compounding the grief of the families of the slain, the government of Iraq in an inhuman and callous act aimed at concealing evidence of its complicity in this crime against humanity, has denied the families the opportunity to bury their loved ones with dignity and in accordance with their faith.There can be no doubt that this mass and secret burial was aimed at concealing the complicity of the government of Iraq in the massacre of 52 defenceless and unarmed civilians.

For 165 days, the families of the slain residents, their lawyers and human rights advocates the world over lobbied for the return of the bodies of the victims, in order that they could be buried by their loved ones in Camp Liberty. This right was denied to them. Based on an agreement between the representatives of the residents of Camp Ashraf and UNAMI, on 2 September 2013, the 52 bodies were to remain in Baquba Hospital until an independent and impartial investigation and autopsy could be carried out.

As pointed out by Mrs Maryam Rajavi, the President elect of the National Council of Resistance of Iran, the objective of this secret burial was to destroy the evidence of a crime against humanity and to protect the perpetrators from justice. There can be no clearer indication of the government of Iraq’s culpability in this atrocity than its attempt to destroy evidence by burying the bullet riddled bodies of the victims before an investigation could take place.

Today, representatives from Anglo-Iranian Associations in the UK and the families of the victims met outside the US Embassy in Grosvenor Square to condemn the burial and to call on the Security Council to refer the case to the International Criminal Court.

The IPCDA strongly condemns the secret burial of the 52 Ashraf victims and calls for an independent international investigation by the International Criminal Court into the massacre and hostage-taking at Camp Ashraf on 1 September. The IPCDA further reminds the government of Iraq that burying the corpses of the deceased will not hide its complicity in a crime against humanity but will further compound its culpability in the 1 September massacre at Camp Ashraf.

International Parliamentary Campaign in Defence of Ashraf and Liberty

In December 2013, Foreign Policy Magazine reported “The raid on Camp Ashraf killed at least 50 members of the MEK, which laid down their weapons at the request of U.S. authorities and in exchange for promises of protection from the U.S. military. Leaders of the MEK claim that Iraqi security forces were behind the attack.”

Baghdad has denied that claim, and U.S. officials have concluded that a small number of Iranian paramilitaries from its feared Islamic Revolution Guards Corps helped plan and direct the assault on the camp. Three officials, speaking to FP, said gunmen from two of Tehran’s Iraqi-based proxies, Kitab Hezbollah and Asaib Ahl al-Haq, then carried out the actual attack. Additionally, seven members of the MEK were abducted from Ashraf and taken to Iran, where they haven’t been heard from since. The Iranian involvement in the Ashraf massacre hasn’t been reported before.

“Iraqi soldiers didn’t get in the way of what was happening at Ashraf, but they didn’t do the shooting,” a U.S. official briefed on the intelligence community’s assessment of the attack said in an interview.

This situation speaks volumes about the United Nations and the government of the United States Of America.