Maj. Kopczynski will succeed Lt. Col. Marcus Thomas, who has served as the director since March, 2010.

Kopczynski, a 26-year veteran, is assigned to Camp Atterbury Public Affairs. In 2008 she deployed to Iraq with the 76th Infantry Brigade Combat Team as part of the largest deployment of Indiana National Guard troops since World War II.

“Our Indiana National Guard families are the heart and soul of our organization, and I am excited to have the opportunity to serve them, as well as the Hoosier Guardsmen and women who sacrifice so much for our great state and nation,” said Kopczynski. “It is a true honor to be selected for this important position.” 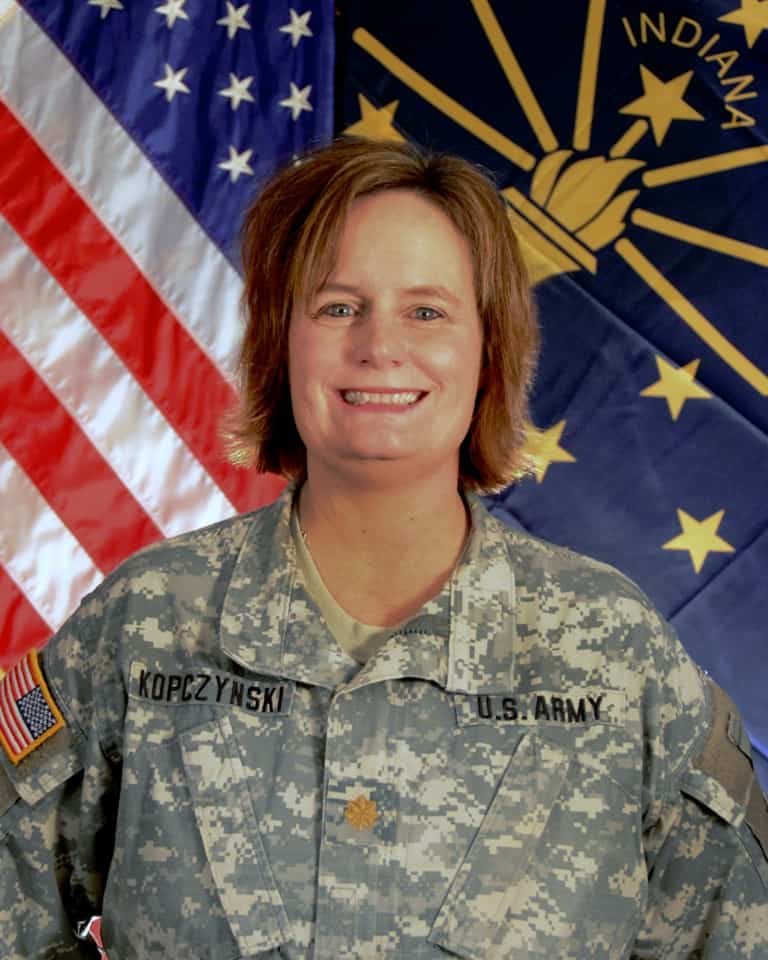 Kopczynski has served in various positions throughout her military career including 12 years as an enlisted soldier achieving the rank of staff sergeant before becoming an officer in 1999. She is certified in Army public affairs, logistics, maintenance, plans and operations, as well as personnel and administration management. She has held positions such as platoon leader, executive officer, equipment specialist, company commander, and public affairs officer as well as the state doctrine, training and exercise officer.

Kopczynski earned her master’s degree in management from Oakland City University in 2003 and is a 2013 graduate of the U.S. Army’s Command and General Staff College.

“Maj. Kopczynski is a highly competent officer and has the right skill set to take on this new role. I know she’s up to the task,” said Umbarger. “Lt. Col. Thomas has led the department that serves soldiers, airmen and their families with honor and integrity. The work he does is incredibly challenging at times, but comes with great reward when a service member or their family receives the help they need.”

Thomas served most recently as the commander of the Special Troops Battalion, 76th Infantry Combat Brigade Team. Previously his command assignment he served in various units in the fields of logistics, administration and maintenance. He deployed to Afghanistan as the executive officer of the 113th Support Battalion in Aug. 2004. “It has been an honor and a privilege to serve as the State Family Program Director for the last four years,” said Thomas. “Sustaining Indiana citizen soldiers, veterans, retirees and their families is a unique assignment and is critical to our National Guard.”