INDIANAPOLIS – In the past 24 years, the RCA Dome has crowned five NCAA championships and stood home to the world champion Indianapolis Colts, but on Jan. 2, the dome hosted the largest going away party in Indiana’s history. The Indianapolis Colts, Gov. Mitch Daniels and the state of Indiana paid tribute to Hoosiers assigned to the 76th Infantry Brigade Combat Team before they departed on their journey that will take them to Iraq and back.

Today marked a hallowed and honored day for those close to the Indiana National Guard’s 76th IBCT, who rallied under the dome to bid a fond farewell to more than 3,400 Soldiers called to duty. Packing stands along the dome’s eastern half, thousands of loved ones and supporters braved cold weather and choked back swells of emotion to see off one of the largest deployments in Indiana since World War II.

Among the dignitaries in attendance was Colts President Bill Polian, who said that while the dome has had many memorable moments in the past, today marked a truly monumental occasion.

“I’ve heard this place referred to as the ‘Hall of Heroes’ before,” Polian said, “but those heroes don’t wear the numbered sports jerseys; instead, they choose to wear the uniforms and insignia of Indiana’s finest, the American Soldier.”

Deploying in support of Operation Iraqi Freedom, the brigade is both prepared for the mission and proud to be part of it, said The 76th IBCT commander, Col. Courtney Carr. “The Nighthawks are proud and fortunate to be Hoosiers,” Carr said. “We’ve chosen to be Soldiers, knowing that the nation would call us to serve. For a great number of us here, this is not the first call, but we continue to choose the path of service to our nation.”

As Soldiers unloaded duffel bags onto the field, many of them gave their last, tearful goodbyes to friends and relatives. But despite the distance that Soldiers will face during their 12-month deployment, family plays one of the most important roles in a successful mission, Carr said.

“For the next year, meals, sporting events, homework, doctor appointments etcetera will fall completely on the families,” Carr said. “But for many families, normal routines will be a little more difficult. Your strength at home, leading the family, and your support of our Soldiers and our mission is also a critical strength to our force.” “What you all do allows us the opportunity to choose to be soldiers,” Carr added.

Christina Adams, who attended today’s departure ceremony, said that she is fortunate to be a part of the Indiana National Guard family. Last Saturday, she married Pfc. Jeremy Adams as a final gift to him before he deploys.

“For this organization, family comes first, and it means a lot to have all these people and programs that support our family available to us,” she said.

The brigade will begin their journey today to Fort Stewart, Ga., where they will complete a rigorous and immersive training routine prior to deploying to Iraq. After returning from a 10-day holiday break, the brigade’s focal point now lies in preparation. 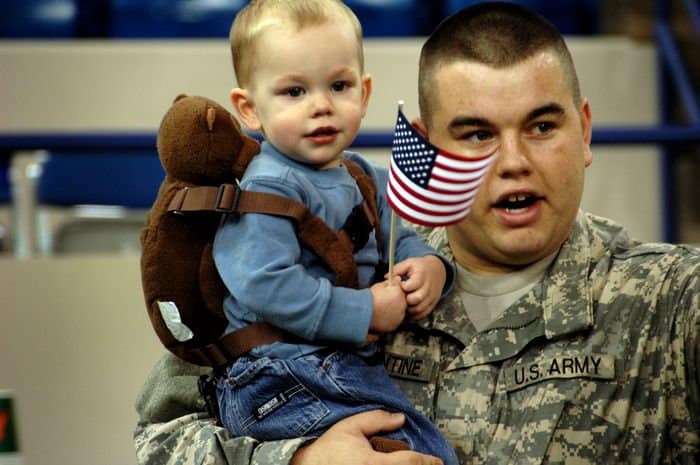 “Right now our main focus is getting everyone prepped and trained to move one step at a time,” said 2nd Lt. Justin Newett, a member of the brigade’s E Company., 1st Battalion, 151st Infantry Regiment. This will be Newett’s first overseas deployment.

“I’m not nervous yet, but as we get closer to Iraq I guess we’ll get to that, but right now I’m just concentrating on getting to Georgia to train.”

Carr assured many families that the brigade will receive some of the best and most comprehensive training available. “There is a clear relationship between well-trained, professional Soldiers and units and how successful they are in combat,” he said. “The training that we’ve worked so hard to complete ensures that every one of the Soldiers in front of you has the training to execute the missions to which we’ll be assigned.”

“You are my first appointment in this deployment, and I have not made a better one,” he said. Daniels also addressed members of the brigade, praising them for their service and sacrifices.