I came across this case only yesterday by accident, perhaps because the mainstream media have decided to ignore it, or worse still, have been told not to cover it?

Hollie Greig is a 30 year old woman who suffers from Down’s Syndrome, and if her claims are true, she is the victim of one of the worst cover-ups involving paedophiles in recent years.

According to Hollie Greig, she was sexually abused from the age of six by her father, Denis Charles Mackie, and her brother Greg.

As terrible as this is, the story becomes even more shocking, because it turns out that Hollie Greig’s father offered her to an extended ring of paedophiles. In the report I read it stated that the “ring of paedophiles included a serving police officer with the Grampian Police named Terry Major and a very high profile gentleman called Graeme Buchanan who happened to be the Aberdeen Sheriff” 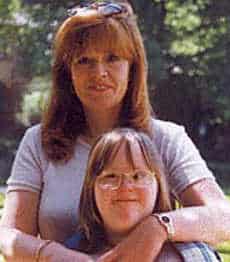 After extensive investigations by medical staff and the Grampian Police “Hollie’s account was fully accepted as being authentic,” but no further action was taken.

The Palestine Telegraph article states “One of the main players in this deplorable case was that of Elish Frances Angiolini, a Scottish lawyer who has served in the political role of Lord Advocate in Scotland since 2006… This lady prevented any action being taken by the police or should I say against the police and the Sheriff and consequently allowed the main offender, Denis Charles Mackie …to escape the country and settle in Portugal.”

Later, Anne (Hollie’s mother) was “forcibly taken to a mental institution in the hope of taking Hollie from her and handing her back to her evil father.” However, after being checked “by a leading psychiatrist” she was certified as being perfectly sane.

The fact that Hollie has been receiving payments from the Criminal Injuries Compensation Authority, would seem to suggest that she is indeed officially accepted as a victim, but those guilty of the crime appear to be receiving protection.

Investigations by “Private Investigators into Hollies situation have since revealed the presence of other paedophile rings in Scotland and it became clear that senior authority figures in Scotland are prepared to obstruct the course of justice and allow the sexual abuse of such vulnerable members of our society to continue unchecked in order to save their own necks.”

Journalist and Broadcaster Robert Green, who has decided to investigate the Hollie case, wrote to Sheriff Graeme Buchanan in June 2009 and asked “Do you know, or have any involvement with any of the following?” and went on to list Hollie’s name and those allegedly involved in the offence.

A reply was received from the Scottish Court Service (although not from Sheriff Graeme Buchanan in person) saying Sheriff Buchanan advises .” ..the names stated in your letter mean absolutely nothing to him and he has no idea what this is about”

As part of Robert Green’s investigation, he “went up to Scotland only to find himself arrested by the Grampian Police with heavy involvement by Scotland’s Crown Office. Robert had traveled to Aberdeen to attend a public protest against the lack of action by Scotland’s law enforcement agencies in bringing to justice identified individuals belonging to an Aberdeen based paedophile ring, names of which included members of Scotland’s legal establishment and the local Sheriff.”

“It was ironic that his appearance the next day was at the Aberdeen Sheriff Court where he was taken before a colleague of the Sheriff who was named as a key player in this Paedophile ring.”

Apparently, just last month, the “Crown Office revealed there was not enough reliable evidence to proceed with the case.” Saying “Crown counsel have considered all the available information and decided that there is insufficient credible, reliable and admissible evidence to justify criminal proceedings in respect of these allegations.” However, it has been stated that only Hollie has been interviewed in the “investigation”

To add to the mystery, Hollie’s Uncle Robert David Greig (Anne’s Brother), died in what police have called a suicide (he was found in a burnt out car close to Aberdeen). It took some time for Anne to obtain a copy of the Autopsy, but it gave the verdict of death as “smoke inhalation but also noted that Robert had severe damage to his skull, two broken ribs and a broken sternum. In addition to this his body also contained much alcohol (even though Robert was a non drinker) and the autopsy found residue of whiskey in his stomach. A person apparently came across the car and attempted to save Robert which came across as a sort of heroic story when in actual fact it is believed that this person was indeed the murderer.”

Clearly, something is very wrong with this case and those who appear to be blocking any serious investigation are either directly involved in the Paedophile ring, or are protecting (for whatever reason) those that are.

At the moment, only a handful of articles have discussed the Hollie Greig case, and considering the evidence, this is shameful. This story must be heard by a much larger audience, in the hope that pressure can be placed on the authorities to take this more seriously. Our thanks go to Peter Eyre and The Palestine Telegraph for highlighting the tragic Hollie Greig story.