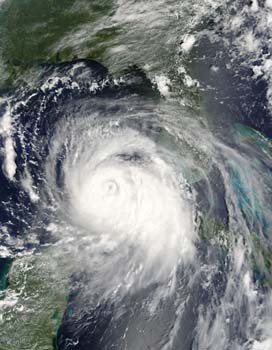 NOLA.com received a Breaking News Pulitzer Prize for their innovative coverage of Katrina. Much of the success of this shoestring operation was due to the editor, Jon Donley, who weathered the storm, then moved the operation to Baton Rouge.

Once the traditional presses of the Times-Picayune proved inoperable, the news of Katrina (and that was the only story coming out of New Orleans) had to be published on the blogs of NOLA.com. Most people had evacuated the city, so the only way they could experience what was happening in their city, was to stay glued to the NOLA.com site.

The way this works is that overnight Katrina knocks out the traditional newspaper industry, and forces a new form of media to emerge, ‘Online Journalism.’ Okay, it experienced some evolution going back to the late 1990s, but what Jon Donley and staff did during Katrina was new.

To start with, so that you can fathom the scope of what happened on the internet in late August of 2005, take a look at these figures, which I’ve taken from an interview with Jon Donley right after the storm hit. On Sunday, August 28th, the day before the storm hit Louisiana, NOLA.com received 10 million page views, on Monday it rose to 17 million, then by Friday, September 2nd, it went up to 30 million page views.

What was the reason for this? One of the only ways people throughout the world could get the local news coming out of New Orleans was to read NOLA.com. The crucial issue is that many rescues were conducted by the National Guard by receiving information on these blogs and forums. Calls for help were listed on the site and then rescuers could respond to these pleas.

“The site has been fantastic-and quite a life saver-and I truly mean a life saver. I listed a friend’s mother, who needed rescuing on the site and between me and the numerous caring people who responded-she and her daughter were picked up by the National Guard. Bless everyone that had a hand in keeping that site up and running!” Some praise from Eliza Schneider via email.

Jon Donley further explained how this process worked. The stranded person might text a relative in a different city. This relative would then contact NOLA.com who would then post the plea for help online, which would include an address. The commander of the relief effort, Lt. Gen. Russell Honore, had ordered a group of people to monitor the site and pass it on to rescue teams, such as the Coast Guard. Many lives were saved as a result of this new form of communication.

Another interesting aspect of this online coverage of Katrina, is the way that evacuees could view satellite photos of their flooded neighborhoods. This was devastating to them, I’m sure, but at least they got the news of what had happened to their homes and to their communities. Donley says in the interview, “Necessity is the mother of invention.” In other words, the only way that vital rescue information could flow to the public was via the internet.

Overnight media and communications were transformed. Katrina changed so many things. What it did to media was that it undermined the traditional newspaper business the minute it made landfall. Jon Donley was able to quickly adapt to the crisis, gather up the conduits of the news, and stream it on NOLA.com to an anxious world. The story of how this was accomplished should be told completely.

NOLA.com blogs and forums help save lives after Katrina