It looks as if the volcano under the Eyjafjallajokull glacier may provide the airline companies with an opportunity to squeeze in some long awaited flights, but how long this will last is uncertain.

The volcano is still erupting, but appears to be producing more lava than ash. The wind direction, at least in Iceland, has also changed and maybe Britain and Northern Europe will see some changes in this area too?

While the volcano remains active, and it could for a very long time, we may see periodic spells where this eruption produces the quantities of ash that have been apparent during the last week.

The last time this volcano erupted was in December 1821, and after a series of explosive eruptions (lasting several days) it remained active on a more subdued level until June 1822. Between the end of June and the beginning of August 1822, another sequence of explosive eruptions followed, but for the rest of the year became quieter. 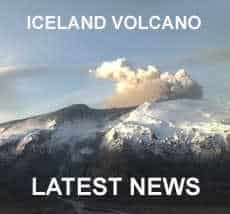 In the spring of 1823, a neighbouring and much larger volcano erupted (the Katla volcano), and this had a global effect on the planet, creating a climatic cooling.

Most people are probably now aware of the potential health risks of volcanic ash, but may not know that in the last eruption of the volcano (currently in the news), the ash contained a large percentage of fluoride, which in high doses may harm the bone structure of cattle, horses, sheep and humans.

We have been brought up to believe that fluoride is good for us, but in reality it is a poison. There are many organisations trying to get this substance banned from the many products we use. It can be found in toothpaste, mouthwash and in our drinking water (among other places).

It may be a coincidence, but I have noticed a very unpleasant taste in the drinking water in my region, since the ash cloud appeared over the UK. This could be the result of many other factors, but it may be as a result of volcanic ash contaminating the water supplies. Unfortunately, fluoride is not an easy substance to filter out. Needless to say, I have stopped using water from the tap!

With the possibility of further eruptions and ash clouds coming our way, and more flight disruptions to look forward to, it might be a good time to make plans for these events.

The government should certainly look at creating a plan to help passengers who become stranded when planes are grounded, and be able to put a rescue plan into operation at a moment’s notice.

Those thinking of taking a holiday may be wise to consider a location that can be reached by alternative forms of transport.

And if the volcanic ash is affecting water supplies, this problem certainly needs to be looked at as a matter of high importance.

The authorities and the public have been caught by surprise with the eruption of the volcano in Iceland, but now that we have experienced the effects, we should make every effort to reduce the problem as much as possible. This may be the first time we have encountered such an event, but it won’t be the last!