Hollywood’s golden age glamorized smoking and one of the reasons was a big payoff.

Clint Eastwood with his famous “cheroot” gave his character a tough, memorable look.

Gunsmoke: Actors such as John Wayne from the golden age of Hollywood were paid thousands to promote smoking.

The research by the University of California, published in the journal Tobacco Control, shows how film classics of the Thirties and Forties still help to advertise smoking today.

The extent of smoking promotion was revealed following the release of documents from anti-smoking court cases.

Gable, Tracy, Gary Cooper, Barbara Stanwyck and Joan Crawford were all top earners in 1937, each taking $10,000 ($146,583 today) in one year’s sponsorship from American Tobacco, makers of the Lucky Strike brand.

The Artistry of Lighing Up … How Hollywood Glamorized Smoking

Throughout a 1942 film, Henreid uses the familiarity of sharing a cigarette, with a famous two-cigarette scene, being used as his introduction to a lonely woman.

The movie scenario: an unhappily married man and a lonely spinster meet on a cruise ship and fall in love.

The scene: a romantic interlude.

“Do you believe in immortality?” asks leading man Paul Henreid.

“I don’t know, do you?” whispers leading lady Bette Davis.

Gliding his hand into his lapel pocket, Henried retrives his cigarette case and says breathlessly: “I want to believe that there is a chance for happiness such as ours to carry on, somewhere … somehow.”

“Are you so very happy then?,” asks Davis.

“Close to it, getting warmer and warmer” sighs Henreid. He removes two cigarettes from his silver cigarette case and places both cigarettes in his mouth and lights them both up. Romantically, he removes one lighted cigarette from between his lips and hands it to his leading lady.

She puffs. He puffs. Their passion burns as hot as the non-filtertips they’re smoking. Smoke rises toward the heavens. They kiss, the camera pans up, up, to the stars … the moon … a climactic musical crescendo and another film character’s virtue is engulfed in a cloud of cigarette smoke.

As this classic 1940’s film indicates, the only tools needed to convey a character’s sexuality was a pack of cigarettes. It also encouraged movie fans to smoke, smoke, smoke that cigarette. 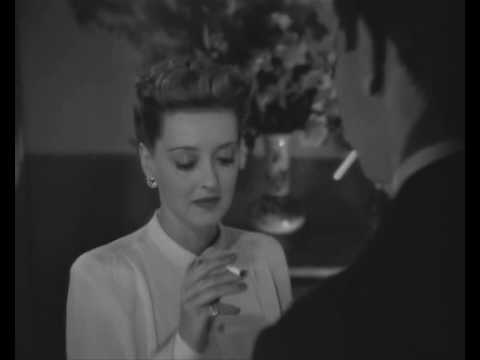 Hollywood has always used tobacco to transmit a certain type of on-screen persona. This precedent, from which today’s films can’t entirely extract themselves, was set early on in films. A wholesome leading lady with high morals never totes her own pack of smokes – and never does she light her own cigarette. Wholesome types, from the 1940s and 50s films, such as Debbie Reynolds, Doris Day, and June Allison, were never photographed smoking a cigarette – on or off the screen.

Actresses like Bette Davis used cigarettes to enhance their personality. Whatever likeness Davis was trying to achieve – be it seductive, depraved, or sophisticated, her talented use of tobacco brought her characters dramatically to life.

Movie stars such as Betty Davis, Lana Turner, Joan Crawford, and Barbara Stanwyk helped spawn a nation of female smokers. But Audrey Hepburn holds the record for the on screen’s longest cigarette holder. In her role as Holly Golightly in 1961’s Breakfast at Tiffany’s, Hepburn used the one and a half foot long cigarette holder to its best advantage.

Many actors use cigarettes, cigars and pipes to enhance their movie characters as well as their own off screen persona. Clint Eastwood used a cigarette to breathe life into his western portrayals. Wrapped in a battered sombrero, a scrubby beard and a black cheroot gripped between his teeth, Eastwood was the unforgettable man with no name in a series of popular spaghetti westerns such as: The Good, The Bad and the Ugly.

With a glass in one hand and a lighted cigarette in the other, nightclub aficionado Frank Sinatra, and his irreverent Rat Pack, created an indelible image of the singing swinger. Cigarettes, smoky rooms and the tinkle of ice cubes was their trademark.

Bing Crosby chose to use tobacco in a different way. He preferred to pack it into his faithful pipe – both on and off the screen, to give him that debonair appearance.

In the movies, a cigar was used to convey the importance of a man. It was the bankers, business tycoons and politicians who smoked big cigars.

President Franklin Roosevelt helped popularize the cigarette. He flaunted his cigarette and holder at a jaunty angle as he waved to adoring crowds. Winston Churchill solidified the cigar as a prestigious smoke.

Ernie Kovaks made the white owl cigar his trademark and Groucho Marx was synonymous with the long stogie.

In the early 1960s, the journal of the American Medical Association made a definitive statement linking smoking to lung cancer. By 1966, the Surgeon General of the United States required all packs of cigarettes to be labeled with a warning. Smokers began to worry about their two pack a day habit. In 1971, the television advertisement of cigarettes was prohibited. Celebrities too were coming to the realization of the dangers of smoking and they began to take up the cause against smoking.

The use of tobacco spans the globe and predates written history. It has been transformed to fit tastes and cultures. Its popularity plummeted as a status symbol and then increased temporarily, in the form of cigars in the 1990s, when female celebrities began using them to create an independent, free spirited image. Madonna ignited a trend for female cigar smokers when she lit up a huge stogie on the Letterman show. Demi Moore followed suit gracing the cover of the Cigar Aficionado magazine. for a short time, Cigars, formerly a gentleman’s domain, became a lady’s torch of freedom.

The use of tobacco was once a personal choice. And a right for those who wanted to do what was good for themselves, and hang public opinion. The general public went along with this idea until it was discovered that the effects of second hand smoke were equally as dangerous.

No one, especially Hollywood, could have known how that little cigarette was going to wreak such havoc over us. Over 400,000 people die yearly in America from cigarette-related causes. and another 50,000 more die from secondhand smoke. With stricter no-smoking laws and increased taxes in effect since 1998, the ratio of smokers in America has dropped by half.