DETROIT- Lech Walesa was in Detroit at Wayne State University and will address theology students tomorrow at the Madonna College-Satellite Campus in Orchard Lake, Michigan. He opened the “Solidarnosc: Poland’s Struggle for Freedom” exhibit at the Walter P. Reuther Labor Library on the WSU campus. It is the thirty year anniversary of Solidarity and Wayne State will run the exhibit until July 1, 2011.

At a special luncheon at the WSU McGregor Memorial Conference Center, the former Polish President enjoyed the company of Senator Carl Levin of Michigan (D). The labor leader was ably assisted by translator Magda Iwinska. He was in New York recently for an ironworkers rally in Times Square. He will next travel to Chicago for a political fundraiser. 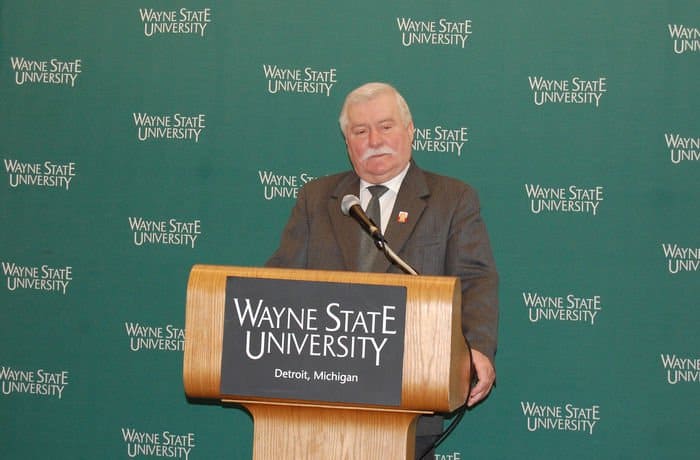 During a preview he spoke about the Solidarity movement in Poland. He said, “We didn’t have guns or missiles, but we had spirit and faith – and union workers need to act as one when facing foes that want to drive them apart. The spirit is stronger than missiles, tanks and nuclear power.”

The Reuther Library was set appropriately and timely. Library Director Michael Smith did Detroit labor history proud, especially with the historic posters. Archivists Dan Golodner, Elizabeth Clemens and librarian Kristen Chinery presented informative displays and compelling information. ‘We got great help from the Polish Mission in Orchard Lake, the AFL-CIO, the American Federation of Teachers and the U.A.W.,” said Golodner. “They had great stuff from thirty years ago.” The exhibit is presented in both Polish and English. 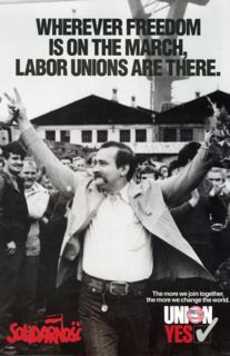 Walesa was very open and his words verified the help Solidarnosc got from former U.S. President Ronald Reagan and Pope John Paul II. “When Pope John visited Poland it was more powerful than nuclear weapons and tanks,” he said. “Pope John unified the factions, he brought us together. “We got great help from the unions in America,” Walesa added.

“In the new era of globalization, there is opportunity for peace and prosperity, providing we have some essential reform,” he added. He was folksy with humor and joked about Polish Democracy. “We have over a 100 political parties in Poland and there is a saying…..when two Poles talk politics they start another political party,” he said smiling.

“We are equal under God. We are all essentially needed. We cannot have disproportions between countries or manufacturing plants will transfer from country to country,” he said.

Special visitors to the opening of the exhibit were Marcin Chumiecki of the ‘Polish Mission’, Piotr Cywinski of the Auschwitz-Birkenau Museum in Poland, Artur Patek of the University of Krakow-Jagiellonian University and Wanda Strozyk, President of Solidarnosc-Fiat.

Strozyk commented on current union situations in Detroit, “The teachers in Dearborn (AFT) and the Flight Attendants (AFA-CWA) at Delta Airlines, vote the union, it is a no brainer. With the union, labor can exercise their rights,” she added.

The exhibit got great feedback from the preview crowd. “After the exhibit finishes here, we hope to present it at the Polish Mission in Orchard Lake, Michigan,” said Chumiecki.