We should know by tomorrow whether the outgoing Governor of New Mexico, Bill Richardson will pardon Billy The Kid. More votes favor a pardoning. Governor Lew Wallace had offered the pardon to Billy in exchange for his testimony against three men who killed a one-armed lawyer. Billy kept his end of the bargain, but Lew Wallace reneged on his. Therefore, Bill Richardson should grant the pardon.

The problem with the Old West is an age old one. What is myth and what is verifiable history? I’m a trained historian, but even this morning I prefer to dream of the myth. I can remember passing through Fort Sumter, New Mexico, while on vacation with my family (in the ’60s), and my dad pointing out supposed spots where The Kid had once trekked. His misdeeds were black and white celluloid frames to me that flickered across my infantile imagination. 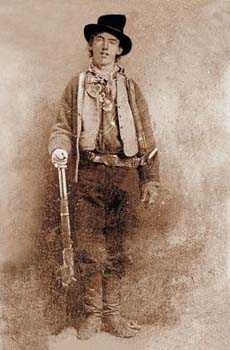 Then, later on during the ’70s, a romantic movement developed here in Austin, where all things associated with the Old West were fodder for artists and songwriters to use as material. Bob Dylan did this frequently, first with John Wesley Harding, then with his song and movie Pat Garrett and Billy The Kid. Not that I didn’t realize that this was merely myth-building, but I was in it for the ambience and the romantic lore that could be had, when one recollects so many violent gunfights, or pictures dusty streets filled with suspicious strangers, or hears the rinky-tink piano sounds wafting out of rowdy local saloons.

You get the picture! And we had a real Old West bookstore here in Austin that had all the magazines and dime novels you could dream of. Been meaning to research where it was located and what ever happened to it? Never got around to it though. I do, however, recall a friend of mine, Mike, who worked there and would bring home many pulps or pamphlets of Ed Bartholomew, a famous writer on the lore of the Old West. One time I took my friends, Mike and Dottie, on a day trip to visit the grave of Wild Bill Longley.

I’ve always been interested in the life and doings of Billy The Kid, but never have gotten around to engaging in a serious study of those times, the 1880s I mean. I understand that Bill Richardson is a serious student of Billy. And I heard of that legitimate biography of Billy in a recent Wall Street Journal article by Stephanie Simon. I will look for the title The Illustrated Life and Times of Billy The Kid, by Bob Boze Bell.

It’s time to approach this subject of Billy The Kid seriously, looking for verifiable history, not myths that are a conjuring of movies, pulp novels, or the shenanigans of charlatans hustling a buck at shaky tourist-traps, that spin the cotton-candy of the Old West. For this is what we want, not the cold truth that maybe Billy was just another punk, maybe even just a ruthless killer, not another Robin Hood of the common people, who defied the odds and eluded the hand of the law (at least for a while).

One hopes that when Bill Richardson makes up his mind, he will rely on the facts of the case, that he will render judgments only from primary evidence, real records of those times. Yet one realizes there is an economic factor also. Billy The Kid generates big dollars for New Mexico, in terms of his box office draw as the most famous outlaw ever. And since a majority of people want Richardson to pardon Billy, this may weigh on his thinking. So the departing governor finds himself in a bit of a pickle.

His own legacy is a consideration. Billy’s been dead now for 130 years, yet his spirit certainly yearns for justice. And Bill can’t do anything to jeopardize the economy of New Mexico. That leaves him with little choice but to pardon The Kid. Charlie Crist took the leap and pardoned Jim Morrison. Do the right thing, Bill, and set him free of the traitorous misdeed of Lew Wallace! I feel liberation now as I dream of Billy’s clever escape from a jail and courthouse of Lincoln, New Mexico.