For those old enough to remember, the new IRS scandal takes you back to the early 1970’s, Richard Nixon and Watergate.

Heads should start rolling at the IRS soon. They may be sacrificial heads, better known as low-level scapegoats, but roll they will.

It has now been verified that the Internal Revenue Service provided confidential documents from conservative groups to the investigative website ProPublica.

The website requested documents on 67 organizations after the 2012. It now appears the IRS complied with the request on 31 groups. Interestingly, nine of those groups had not even been given nonprofit status when the request was granted.

Unapproved applicants are not subject to release of their documents to anyone – it is an IRS rule. Propublica made six of those applications public after considering them “newsworthy.”

The information ProPublica received was from conservative groups. Not one group was labeled liberal or centrist.

As ProPublica reporter Kim Barker said, “We requested applications from the IRS for all groups that didn’t report their donors for political spending to the Federal Election Commission,” she told Newsmax.

Barker went on to say they had been requesting applications from “all groups” which she was quick to add, “that list of 67 included liberal and centrist groups.”

ProPublica actually called the IRS after receiving volumes of documents on unapproved groups. They asked them why they were sent and got no clear reason.

This was the IRS justification:

“It has come to our attention that you are in receipt of application materials of organizations that have not been recognized by the IRS as tax-exempt,” IRS spokeswoman Michelle Eldridge wrote back. Eldridge told ProPublica that publishing unauthorized returns or return information was a felony and carried a fine of up to $5,000 and/or a prison term of up to five years.

That met with this response by Richard Tofel, ProPublica’s general manager and now president. “ProPublica believes that the information we are publishing is not barred by the statute cited by the IRS, and it is clear to us that there is a strong First Amendment interest in its publication.”

The IRS provided a weak excuse last Friday claiming low-level workers in its Cincinnati office had improperly targeted groups with “conservative” and “tea party” in their names for additional scrutiny.

Reminiscent of the Watergate years, spokesman Jay Carney tried unsuccessfully to distance the Obama administration from the situation with little success.

The law reads that groups that are given nonprofit status don’t have to report their donors. Part of the additional scrutiny of the groups included requests for a list of their donors. Such groups poured $322 million into the 2012 election, with 84 percent coming from conservative groups, ProPublica has reported.

Somewhere in the Cincinnati offices of the IRS, scapegoats are reading the want ads.

Thanks to One Citizen Speaking for the pointers to the lists of questions the IRS asked the Richmond Tea Party group. 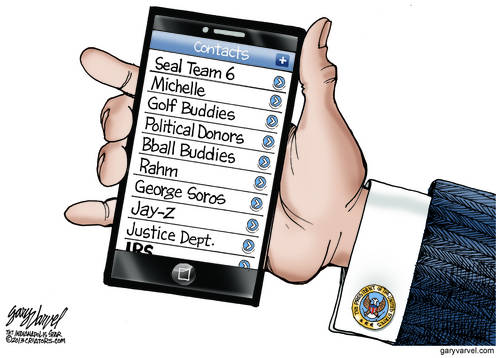