We owe “The greatest generation” a debt of gratitude. They put their lives on the line for their country and its ideals. Some did not return. Some returned with injuries. Unfortunately, we are losing them at a rate of 1,000 men and women each day.

Hundreds of World War II veterans came from Mississippi on Honor Flights to visit their memorial on the Washington Mall. Even though the president and Congress couldn’t negotiate a way to keep the government running, and the path to the memorial was blocked, but action was taken to get these men and women to the memorial.

The Veterans had planned the trip for months, and they were not going to be denied the right to see the monument built to honor the bravery of the men and women who risked or gave their lives.

On Tuesday, it was reported that individual members of Congress called the Washington, DC Park Police, ordering them to move the concrete barricades that were set up to prevent access during the government shutdown.

Former Michigan Rep. Pete Hoekstra accompanied the veterans, and he, along with other citizens yelled “Let them in; let them in,” over and over to mass loud applause and encouragement to remove the barriers.

Apparently, park security made no effort to block the WWII vets, many having difficulty walking, and others in wheelchairs. More than likely, this will be their last chance to see the memorial in their sunset years.

The congressmen who took part in the intervention included Democratic Sen. Tom Harkin of Iowa and Republican Reps. Bill Huizenga of Michigan, Louie Gohmert of Texas, Steve King of Iowa, and Rep. Steven Palazzo of Mississippi, who organized the intervention.

Remember those names next election day.

Gohmert circulated a “call-to arms” to fellow colleagues encouraging them to participate to ensure their trip would not be in vain, according to The Mississippi Press. [ Honor Flight vets don’t let barricades stop them at World War II Memorial ]

According to Rep. Hoekstra, “I was told their leadership told them not to do it. It would step on their messaging. But that’s the bigger lesson for today. Just go out and do the right thing. And this was the right thing to do,” he told Newsmax by phone.

“They accepted this act of civil disobedience by these congressmen and didn’t try to make a scene. Watching the vets enter was emotional,” Hoekstra said.

Many in Congress were at the Reagan National Airport to welcome the Honor Flight vets, and then joined them on their path to the monument. Honor Flight, for those Americans unaware, is a national non-profit organization that raises money to honor veterans with free trips to Washington.

Honor Flight’s Chairman of the Board Jim McLaughlin said, “It’s devastating the government shutdown), these World War II veterans have been waiting 65 years to see this memorial and for them not to have the opportunity to see it. I can’t imagine how these veterans might feel going home tonight and not getting their chance. For most of them, this is their only chance.”

The average age of these vets is now around 87-88 and many are in their early 90s.

He would have been too, even if he had to crawl. 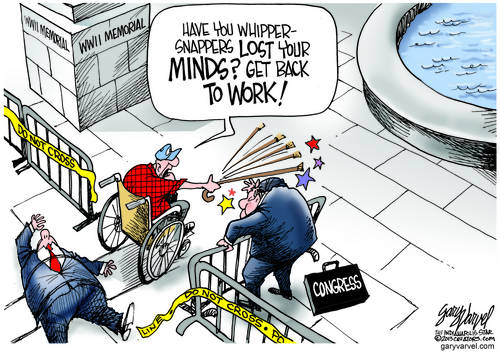