Iran is a problem to its own region. Iran’s hegemony has all of its neighbors worried. Iraq is little more than a satellite of Iran. Syria acts as a proxy for Iran and Russia supports Iran’s actions, even though it does not direct them.

Iran, a member of the United Nations, imprisons, tortures and tyrannizes its people, especially those opposed to the way it conducts itself. The United States of America, unable to exercise any control over the theocratically controlled country, enables it to interfere in regional wars, distracting everyone from Iran’s purpose of gaining nuclear capability, so it can become an unstoppable hegemon.

The US State Department seemingly does not “get it” and appears to have some fantasy world inside their heads, believing they can talk Iran into playing nice. They can’t, but it seems they will continue to try until after it is too late.

The US has abandoned one of the real oppositions to the villains running Iran, and the opposition is slowly being killed off, a few at a time. This is so slow that few seem to notice or care.

Some current and former US, British and EU politicians and other former administration figures do care, and they write regularly about it, sometimes in NewsBlaze. It seems they have no ability to affect the thinking of their governments, even though they have valid arguments, and the course of action they advise would be very easy to implement.

A few days ago, the National Council of Resistance of Iran (NCRI) issued a press release, calling for urgent action to save four prisoners, who were transferred on Wednesday morning, April 9, from Iran’s Bandar Abbas prison to solitary cells. The purpose of the move was to implement their death penalties.

Of the four prisoners, two, Ahmad Rahimi and Omid Shekari were both in the youth ward. Ahmad Rahim, 20, was less than 17 when he was arrested.

The third prisoner, Zargham, is 30 years old. Nothing is known about the fourth prisoner.

These four men will soon be executed.

The head of the Iranian regime’s judiciary, Mullah Larijani, referring to a recent resolution of the European Parliament, stated that the European Parliament’s claim of execution of people under 18 was a sheer lie. Technically, he was correct, because they just hold minors in prison until they turn 19 and then they hang them.

Surprisingly, Iran has a human rights body, but it is only a human rights body in name. The head of that group in the mullahs’ judiciary, Javad Larijani, said on April 10: “The problem is that the West does not understand that Qisas is different from execution. We are not ashamed of stoning or any of the Islamic decrees … no one has the right to tell a judge to avert some sentences because the United Nations gets disappointed … we should firmly and seriously defend the stoning sentence.”

So much for human rights. 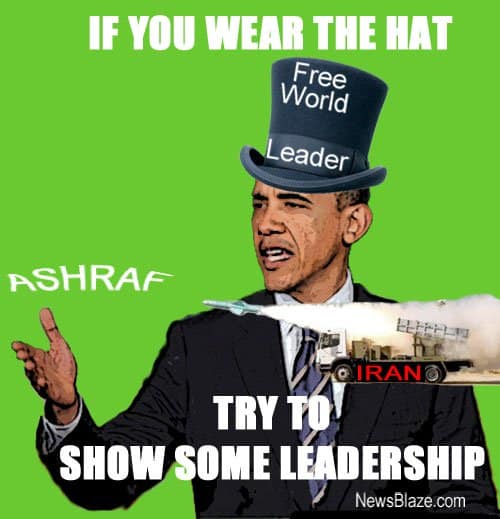 The people of Iran are not happy about their government, the NCRI reports. Even the so-called moderate Rouhani has done nothing about the unabated flow of executions throughout Iran, particularly, they say, “the escalating trend of execution of the youth.” Part of the reason for these executions is “to intensify the atmosphere of intimidation and to prevent the uprising of the fed up masses of Iran,” NCRI says.

People are wondering what kind of perverted game the US, the EU and UN are playing. Could it be a possibility that they are now all under the control of Iran?

Meanwhile, Iran keeps beating, torturing and hanging people it doesn’t like, and the State Department stays on its fantasy island pathway. Secretary Kerry fantasizes about actually doing some good in the Middle East, and president Obama shines up his Nobel prize and plays another game of golf.

The Iranian opposition in the ironically named Camp Liberty in Iraq, forcibly removed from Camp Ashraf, supposedly under the protection of the UN, the US and the 4th Geneva Convention, also continue to suffer, as they are allowed to be killed off a few at a time. With friends like the UN and US, who needs enemies?

Note to Obama: If you’re going to wear the “The Leader of The Free World” hat, showing some leadership occasionally would be a good thing.