“Sorry, the dog ate my homework.” How many teachers would accept that as an excuse from a schoolkid?

Of course, that excuse will never wash for a kid, and it doesn’t wash for the IRS. They store our records for a very long time, and they have servers that receive, forward and store emails. Local PCs have backups. They have extensive backup systems. There are legal requirements for them to keep a paper trail.

The constant scandals of the Obama administration never stop. This is the “big government” crowd, that wants us all to put our trust in government as the answer to every question. Haven’t got enough regulation, enough laws, enough handouts, don’t worry, the government will take care of everything. As usual, since the Obama Administration began, they are treating us all like small children who will believe any weak excuse they come up with.

Guess what – we don’t believe it for a second.

The Internal Revenue Service apparently believes we are ready to buy swampland from them.

Jenny Beth Martin, Tea Party Patriots co-founder, who is suing the IRS, said it “doesn’t pass the smell test and smacks of obstruction of justice.”

Jay Sekulow, chief counsel of the American Center for Law and Justice, working on a federal lawsuit against the IRS on behalf of 41 targeted groups, said “this is insanity. Hollywood couldn’t write a script with any more scandal and intrigue than what is unfolding in the IRS targeting scandal.”

Congressional investigators said Tuesday that the IRS has told them even more emails have reportedly been “lost,” despite virtually every tech expert agreeing that is an impossibility.

The congress is so weak that the administration may even get away with this new scam.

Last Friday, we were told the IRS claimed it had lost some number of emails from Lois Lerner’s computer. The lost emails were conveniently confined to external communications with locations like the White House, Treasury and the Department of Justice.

As we know, Lerner lead the IRS division handling applications for tax-exempt status. She pleaded the Fifth Amendment twice in subsequent House investigations, after pleading ignorance and innocence, but now she faces charges of contempt of Congress.

As if the report of Lerner’s computer crashing, and losing all her emails wasn’t far-fetched enough, we are told that the computers of two other IRS employees also crashed. One of those was Nikole Flax, the chief of staff to Steven Miller, Lerner’s boss and then-deputy commissioner. Miller later became acting IRS commissioner, and he was forced to resign last year after the fact that IRS agents had improperly scrutinized tea party and other conservative groups applying for tax-exempt status.

When Ways and Means Committee investigators interviewed IRS technicians this week, the technicians said they only realized in February or March that the emails were lost. Several months later, they informed congressional investigators of the loss.

Two Republican lawmakers, Camp and Boustany, have already called on the Justice Department to appoint a special prosecutor to investigate the IRS. As we know, Attorney General Eric Holder, who is the only one who could do this, has previously declined to do so. 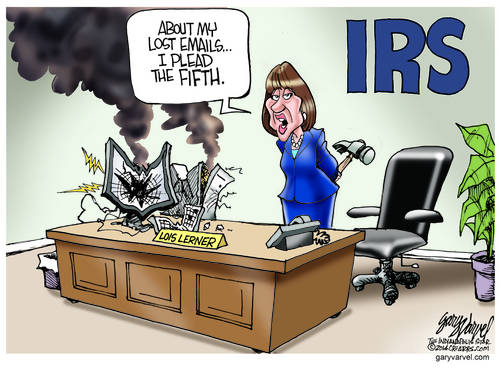 In a statement, Camp and Boustany said, “It looks like the American people were lied to and the IRS tried to cover up the fact it conveniently lost key documents in this investigation. The White House promised full cooperation, the commissioner promised full access to Lois Lerner emails and now the agency claims it cannot produce those materials and they’ve known for months they couldn’t do this.”

IRS Commissioner, John Koskinen, is scheduled to testify before the Ways and Means Committee next Tuesday. The House Oversight Committee subpoenaed Koskinen to testify at an evening hearing on Monday.

There are currently three committees investigating the IRS and their handling of tea party non-profit applications from 2010 to 2012. Two of those committees are in the House and the other is the Senate Finance Committee. The Justice Department and the IRS inspector general are also supposedly “investigating,” but that may just mean they are looking for ways to weasel out of the problem.

Rep. Darrell Issa, chairman of a House investigating committee doesn’t buy the excuses either. Issa said, “Isn’t it convenient for the Obama administration that the IRS now says it has suddenly realized it lost Lois Lerner’s emails requested by Congress and promised by Commissioner John Koskinen? Do they really expect the American people to believe that, after having withheld these emails for a year, they’re just now realizing the most critical time period is missing?”

As is often the case, a far more important distraction is being used to overshadow the IRS scandals and stall the investigations. Although the media, including the very-liberal CNN, have actually reported the loss of the emails, and a skeptical John King on CNN had a good laugh about it, There is no doubt that if a Republican was in the White House, the left-sided mainstream media would have been outraged and all over this. The unbelievable and fantastic IRS stories and the “Leave it to Beaver” excuses would have been torn to shreds, but so far, only Fox News has provided extensive coverage.

Investigators knew that Lerner’s emails held the key to incriminating interactions with people external to the IRS, including possibly The White House. With no access to those emails, the investigation will be much more difficult to follow.

The IRS said technicians “went to great lengths trying to recover data” from Lerner’s computer in 2011. They obviously knew this all along, so why is this information only coming out now?

Someone has been busy at The IRS, reconstructing an email trail, by recovering Lerner’s emails that were CCd to other staff. They said they were able to regenerate 24,000 of Lerner’s emails from 2009 to 2011.

Unless some outside agency provides emails, the “external emails” may never be recovered.

Apparently more than 250 IRS employees have been working to assist congressional investigations, at a cost of almost $10 million. This massive workforce has produced more than 750,000 documents.

And so we go back to the beginning. “The dog ate the emails.” If he were still alive, Richard Nixon would be fuming about now – if only he’d thought of this excuse!