With California’s finances in the toilet, and California State bonds reduced to junk status, Governor Arnold Schwarzenegger decided to take a heavy load off taxpayers by reducing prison costs.

California prisons are full to overflowing with minor offenders who got life sentences for the “three strikes” law and others who are now no threat to society because they are medically incapacitated or they are so old. While most of them committed crimes for which they should have been imprisoned, some of those sentences were grossly out of line. Others still in prison are waiting for judges to take action after “victims” recanted their testimony.

Unfortunately, after making the decision to help the State’s taxpayers, the Terminator brain had a serious malfunction, possibly caused by an erroneous political connection.

Instead of releasing people who were little to no threat at all, (some because they can no longer walk), the Terminator instead slashed 9 years off the 17 year sentence of his buddy’s son, a self admitted killer. Former Assembly Speaker Fabian Nunez’ son Esteban had only been in prison for seven months, after stabbing a college student to death. Not even enough time to know if he was reformed or a threat to society.

So rather than saving California a few billion dollars, the malfunctioning Terminator saved the State around $400,000.

That makes it a sad day in California. Unfortunately, it perpetuates the myth that it doesn’t matter what bad things you do, if you have political connections, you can get off easier than others would have done.

And all this because of a malfunctioning political connection. 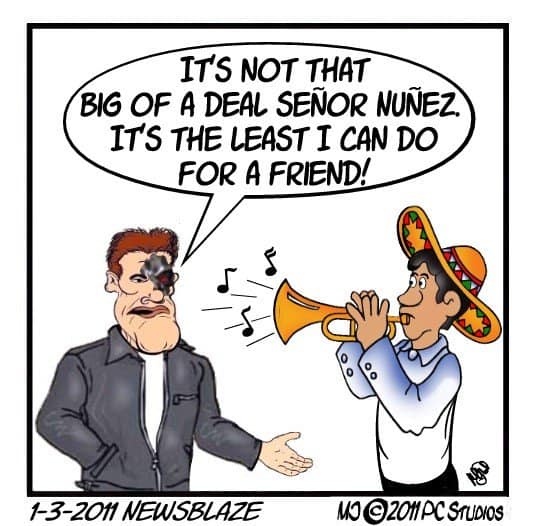