NewsBlaze News
Home Thoughts Opinions SXSW: The Magnetic Fields ‘Love At the Bottom of the Sea’ a...

My favorite song on Love at the Bottom of the Sea is I’ve Run Away to Join the Fairies, mostly for its lyrical wormwood and unexplained drifts into the Brothers Grimm enchanted forest of post-modern disillusionment rampant escapism into toadstool stamina and deleterious doggedness. The droll Druid vocal (of Stephin Merritt) delivery tosses compost on the garbage heap of synthesizer tones and jangle-y guitars, in a cerebral vision wrought with voracious Victorian vivacity and over-spiced with Lewis Carroll-esque nursery rhyme formulas or fibonacci-theorems, and/or otherwise.

Huh? That’s just what I absurdly uttered as I rolled the tone-full oddity by my ears (that ooze wondrous wads of wax) once again, in search of lasting, lost (and found) squeezing(s) of enlightenment, or even entertainment (don’t know what I’m looking for really?) value, if that’s what’s inside (for the getting)? This is my first outing with The Magnetic Fields, so I don’t have much of the mandatory background baggage to properly gauge their evolution or (lack of) development, but making judgment calls in a vacuum can be a fruitful endeavor, since there’s no Knowledge Monkey scratching your shoulders to ribbons with redundant chimerical data. 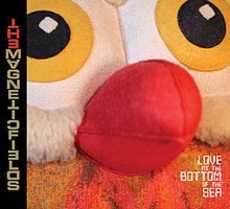 My second preferred ditty is All She Cares About is Mariachi, mostly for its twisted Tex-Mex take on traditional border themes, previously tackled by the likes of Johnny Cash, Marty Robbins, and most of all, The Texas Tornadoes, back when Doug Sahm was still around. This version of the cowboy ballad gone south is more in keeping with They Might Be Giants or San Francisco’s Residents, but has enough of its own lyrical originality to hold its own in the pantheon of tequila sunrise squall of trumpets, or a strung out cowpoke lamenting in the prairie (comma) with the demented limerick of a yankee doodle dandy doing up the Tombstone town.

It would be irresponsible and despicably reprehensible of me to not momentarily, ripely chime-in on the chasm of charms and litanous stick-with-ness, with maximum-ally tweaked pop sensibilities, of Andrew in Drag, one of the sickest, yet funniest slabs of pop-pulp my dinosaur bones has ever beheld! Merritt’s nasal vocal delivery underscores the gender-bender cadence of androgynous rhymes and hook-ish sing-along-chorus, that’s drenched in choir voice echo or reverb, while electronic toys tickle you silly with synth textures.

There’s some filler in here, I’m hitting the high spots, but some of the valleys are a fun time anyway. Your Girlfriend’s Face may be just one of those unsightly valleys, but gets along good with the times, an angst filled age of Investigation Discovery or Crime Jazz crazed movies where serial killers are treated like Wally and Beaver on Leave It to Beaver. Well, don’t go there if you don’t want to, but why is the synthesizer riff panning A Little Bit of Love against lyrics about a woman who puts a contract out on her old man and his extracurricular female fling?

My fifth favorite is I Don’t Like Your Tone, with its lilting melody, is stately and majestic in its message of melancholy and self-justification on matters of the heart. Simply stated, it’s a very pleasant pop song, that pulls the thickets of romantic entanglement away, in favor of clearer, more poignant communication. Reminds me of Sixties’ classics by anyone from Neil Diamond to Paul Simon, or perhaps even Lee Hazelwood. One criticism, would be that every song is a conceit, not forged from a real life experience, although I could be wrong on this call? And what’s with the chicken doll puss for the cover? Irritating, but boy that’s a catchy record title (Love At the Bottom of the Sea)! *Stay clear of those long-winded intellectual reviews that miss the ball!