I think, everybody is interested to know the current political drama in Nepal where the traitors are fighting for the post of Prime Minster. Due to the culprit political elements, the Nepalese nationality, royal institution and democracy is wounded, sovereignty is in peril. They took a decision to draft the constitution within two years by staging a drama of Constituent Assembly (CA). They are set to deceive the people by extending the CA term acting upon their wish after failing to draft the new constitution in the two year period. 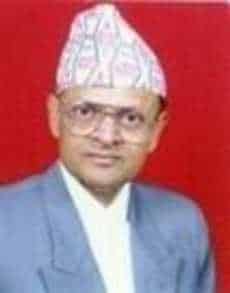 The resignation of the Prime Minister Madhab Nepal can’t give the solution because the upcoming candidates for Prime Minister are all bad choices. The candidates are Ser Bd Deupa-NC, Ram Chandra Paudel-NC, Jhalanath-UML, Dr.Baburam Bhattarai-Maoist, Bijaya Gachhadhar and the last culprit being the daughter of Girija-Sujata Jost (a Garman Citizen).

Mr. Ser Bahadur Deupa is one of the traitor-CIA agents. He is one of the corrupt men. When he was Prime Minister Deuba devised various ideas to remain in power. Deuba declared pensions for parliamentarians; increased allowances by 10 times the number then provided them with Prado and Pajero vehicles. He also led the anti-nationalist Mahakali Treaty. He provided the platform for many corrupt officials in the cabinet to drain the nation’s money. During his third time as Prime Minister after King Gyanendra took to power, the devious Prime Minister drained state money. He was not capable of doing anything in the name of the nation.

Sher Bahadur is the political pendulum of congress’ politics. The period when Sher Bahadur reigned as Prime Minister is considered an extremely corrupt era. Similarly, the Congressman Ram Chandra Paudel is an agent of the Indian Embassy who called him directly. He is a traitor and a corrupt man among Congress, power hungry, visionless who would sell the country for power and money.

Jalanath Khanal is also a dirty and corrupt scoundrel who deceived his party leader–Madhab Nepal PM–although, Madhab was the agent of India. It was suicidal work for him to destroy his own party. He is called the agent of Maoists who want the Prime Minister position to be under the control and support of the Maoists. He is a very useless man in the UML.

Sujata Jost, the daughter of Girija, also a great antinationalist and is a dirty lady in Congress. She is also running for the support by Indians to be PM of Nepal. Her father is the cause of the present crisis in Nepal who destroyed all the identity, and unity of Nepal. Girija changed the ideology and joined hands with the Communists – where it is obvious, Communists never believe in democracy.

Girija always tried his best to groom his only daughter- the corrupt anti-nationalist, Sujata Jost (Koirala) to be in the very top positions. Actually, she is very naughty and has been corrupt her whole life. In the name of her mother, she used the Susma trust to earn too much money. Using the interest, she disgraced business men by selling them credit for her own purposes. Likewise, her father, Girija Prasad with his Dhamija and Boeing scandal overturned the Royal Nepal Airlines Corporation, which was in profit to sell slums into bankruptcy. She can deceive anytime at any time.

Among them, Bijaya Gachadar may be the right man for Prime Minister from Tarai but he is also corrupt like Jaya Pd Gupta and Gobindaraj Joshi and other visionless man. It is in his favor that the Maoists never support him.

Another candidate for Prime Minister is Dr. Baburam Bhattarai who is the agent of RAW. He is the first man to destroy Nepalese Prestige and its national identities. He always challenges Nepali nationalists not to support the monarchy, Hindu Kingdom. The Daily Pioneer said “Baburam Bhattarai and his family are openly Christian, Prachanda does not proclaim his religious affiliations but his wife’s entire family is Christian. His guru,Chandra Pradesh Gajurel, was a Christian preacher.’

So, can we imagine, that democracy can be hoped for from these traitors of the various parties? ‘Each cheat the other, each need the other’.

The leaders of the so-called big parties who cheat each other and busy themselves meeting each other are like those businessmen that exchange horses in the midst of a river. Nepal’s situation corresponds to one party – the communist party’s authoritarian system. Until when should we witness these dramas? UNMIN is here to intensify civil war and afterwards finish destroying the national identity by establishing a Christian state. The current consequences have resulted with the failure to chase away UNMIN ad UN human rights activists in time. They are bent on violating the Nepalese mother by extending their terms.

They are all traitors, scoundrels and criminals. The leaders and 601 CA members – the transgressors that have destroyed the nation – after their actions in 2006 should have been subjected to a minimum of a 5 year ban from any political, social or economic transaction. We do not need transgressors that have destroyed the nation. We cannot allow the Nation to be sold.

The Nepalese people will not let these criminals go unpunished. It is a situation where patriots will submit their lives for the nation. I repeat that the CA, cabinet and everything after 24 April 2006 have failed and should be abolished. An all sector cabinet should be formed in the presence of the king (the alternative force) in accordance to the declaration made by him in line with 1990 Constitution on 20 April 2006 – that was made through an understanding with the national and international community. There are only two likely alternatives: either the Maoist leader Prachanda will be selected as Prime Minister, or a good man may be selected. There are no other alternatives.