Nancy Pelosi wasn’t kidding whe she told American taxpayers to wait and see what was in Obamacare.

They waited and now they are beginning to see it’s another multi-trillion dollar government boondoggle.

As the 2,400 page Affordable Care Act (Obamacare) begins to see the light of day in terms of the overall expense per taxpayer, the outrage grows.

Last Friday. one of the groups Obamacare was going to assist, those with preexisting conditions, received the worst news that they could possibly get – thousands of those individuals will be blocked from the program, according to the Washington Post.

The very program that was designed to assist them has run out of money.

Applicants will be eliminated from state-based “high-risk pools” originally set up shortly after the 2010 bill squeaked by the House. The high-risk applicants began to receive the bad news over the past weekend with the entire group to be informed by March 2.

The shocking news was delivered via Obama administration “officials.”

The officials were quick to add the elimination of this group will not affect coverage already afforded approximately 100,000 people already enrolled in the high-risk pools.

The other people simply came too late. 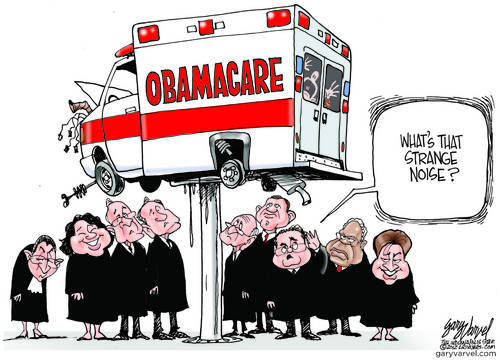 Although the administration originally touted the law would provide coverage to a much larger segment of the population, after 100,000 were registered, far below predicted numbers, the money simply was not there.

As Obamacare winds its way to full enactment in January, 2014, the question on everyone’s mind is what else will be underfunded or falsely guaranteed during the bill’s pre-vote lobbying?

The tune from the administration has changed considerably. According to Gary Cohen, director of the Department of Health and Human Services, “We’re being very careful stewards of the money that has been appropriated to us and we wanted to balance our desire to maximize the number of people who can gain from this program while making sure people who are in the program have coverage.”

Here are The Facts:

– What was touted initially before passage as a temporary program for the uninsured before enactment of the law in 2014 has collapsed. Those already sick and in need are being rejected at present due to lack of resources that was “unforeseen.”

– Only an estimated 135,000 have received coverage from private insurance companies, but unlike what was originally sold by the administration to those with pre-existing conditions, most cannot afford the insurance.

– The problems are not a surprise to analysts. From the inception of the Obamacare plan, leading experts in the health care field have expressed their apprehensions doubting whether $5 billion allocated by the Congress for the Pre-Existing Condition Insurance Plans was fiscally viable.

The Beginning of a Major Crisis?

The situation may very well be the beginning of a major crisis. This is only one small part of a trillion dollar plan now expected to be twice that amount since its’ passage.

This situation has taught Cohen a hard lesson.

Gary Cohen is the first to raise a white flag. “What we’ve learned through the course of this program is that this is really not a sensible way for the health-care system to be run,” he told The Post.

There is exactly ten months until the entire law is fully in place.

There is only half of the $5 billion Congress allocated remaining for the entire fiscal year which means there is only enough for those in the plan already.

The Stark Reality of The Obamacare Experiment

Within the Washington culture of waste, there are many politicians and Obama administration members waiting for the other shoe to drop on an ill-conceived and costly decision involving one-sixth of the economy.

The political rhetoric has disappeared and the stark reality lies ahead for all taxpayers who bought into the Obamacare experiment.