For some time now, suspicions have been rising about the Obama administration’s Obamacare numbers. Who is really signed up and, more importantly, have they paid a premium yet?

Last week, Bankrate Health Insurance released a new survey that shows one-third of Americans currently uninsured have no intention of buying health coverage even though they may be subjected to IRS penalties set out in ObamaCare.

Conservative pundits had a field day, because the uninsured, who were supposed to be the sole beneficiaries of this law, are not signing up.

More healthcare professionals are now voicing their opposition to Obamacare. Michael Morrisey, professor of health economics at the University of Alabama at Birmingham School of Public Health, told Bankrate Health Insurance many of the uninsured are in good health and do not want to spend their money on buying something they don’t think they need.

“It’s hard to generalize, but for some of these folks, it’s a case of, ‘I’m in pretty good health, I don’t think about these things, I know I can’t afford it now.’ I think it’s just rolling past them, and they’re not giving it a whole lot of attention.” – Professor Michael Morrisey

Democratic candidates running for election this November are hearing this message loud and clear.

Last week, the administration announced that more than 5 million had enrolled in private health insurance under Obamacare since open enrollment began on Oct. 1. The numbers cannot be independently confirmed and there is zero information about how many of those who “enrolled” paid their first premium.

In fact, many of those enrolled may not have paid for insurance at all.

There is a widely held belief that included in the 5 million – if that number is true – are duplicates and tire kickers.

Those reasons include: no plans available, inability to get through the broken system to sign up, already had a better plan, had no intention of buying insurance, or the plans were too expensive. 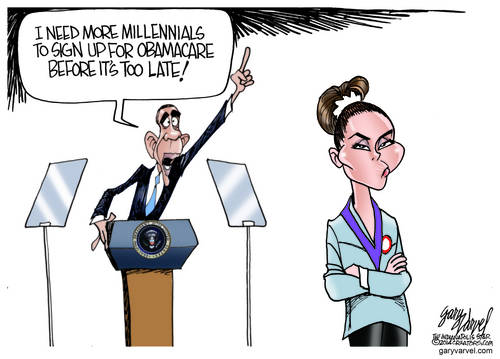 The nonpartisan Congressional Budget Office had their own estimate. They said it was possible enrollment could total 6 million, but private estimates have suggested lower numbers.

In the end, it doesn’t matter how many people went to the website, how many registered, how many reviewed or even selected plans. The key questions are how many actually paid for coverage and how many of those were previously uninsured?

The major bad news for the Obama administration is who is not enrolling. The young and the healthy still see no reason to spend money they don’t have to buy insurance for health coverage they will not get any benefit from.

Without the healthy, including the younger demographic paying for insurance, ObamaCare collapses under its own weight, because a proper risk pool ratio of young and old does not exist.

Chollet said the campaign targets “the young invincibles.” She contends that ads miss the key group – low-income, young families. “They’re probably not spending a lot of time watching television, they never read a newspaper, and if they listen to radio, it’s probably music in the car.”

Not even Obama’s own community, who helped put him into office are backing the law with their money. Chollet said, “In communities of color, people might hear about Obamacare in church, but for people who are not attached to a church, I don’t know how they get the information.”

Another blow to the law’s legitimacy is the fact that only 48 percent of the uninsured were aware they have only until March 31 to sign up. After that, they have to wait for next year’s open enrollment, which begins November 15 (after the midterm elections).

Republicans have almost given up on completely repealing Obamacare, because they don’t have the numbers, and democrats have been sticking together, even though it seems it will cost many of their seats. Something has changed though, and it seems some Democrats now appear to be willing to undo some of Obamacare’s harsh and expensive components, which they didn’t read before they passed it.

Democrats have not been helped by the inept running of the healthcare.gov website, which is still experiencing problems. This week, it went down for 30 minutes, and that crash was labeled “human error.”

Anyone still think that more government is the answer for everything?

Obamacare in not only in the headlines, it is in the Supreme Court. Politicians may not be doing well in the repeal stakes, but other forces are at work, trying to stop the government forcing them to do things that are against their beliefs or ethics. See Supreme Court to Rule on New Interpretation of First Amendment

The big question is – will it save their seats?