Barack Obama, ever the elite optimist, confidently thinks he could have fooled the people one more time. Certainly, Obama would not have seen too sick to campaign, as Hillary Clinton was. But just like the other Democrat elites, Obama has a view of America that ordinary Americans do not see.

What Obama conveniently ignores is that he has presided over 92 million people being out of work and 43 million on food stamps. On his watch, tens of thousands of businesses moved their operations to other countries and it seems he did little about it. The official fantasy unemployment rate may be 4.9%, but that in no way describes the real unemployment rate. For eight years, Obama and his fellow Democrat elites ignored the powerless people who suffer from their policies and spending. Thankfully, those powerless people become all-powerful once every four years.

We heard Obama’s recent comments when Carrier said they were moving operations to Mexico. He mocked Donald Trump, who said he would stop them moving. Obama said “What magic wand do you have?” Well, 300 million Americans discovered that while Obama demonstrated he could be a standup comedian after he leaves office, Donald Trump did what he said he would do, and negotiated a better deal for America.

Carrier is owned by United Technologies. They had already received $121 million from a federal tax credit program that aims to keep manufacturing in the USA. Carrier took $5 million of that. This shows how much they care about the US and the Obama Administration’s policies. Obama made fun of Donald Trump and some critics abused Trump, but he didn’t give away $121 million to make them stay.

15 companies have been leaving the US every day, according to reports, but that may stop now if they face a Trump re-entry duty. Only time will tell, but if the incentives stop, so will the flow.

Unemployment and food stamps are probably the most important and demoralizing problems for deplorable Americans, but there is one more important thing that Democrats did to mess up the economy.

Obama’s “signature law,” Obamacare, while helping people with pre-existing conditions, caused major problems for tens of millions of people who were happy with their healthcare arrangements. Obama delayed the major hits to Americans and the economy this law would create, until after he left office. He leaves that mess for Donald Trump and the Republican-controlled Congress.

Bush, Clinton, Bush and Obama and thankfully not another Clinton, pushed free trade policies that first seemed like a good idea, then destroyed the US economy.

After all of this, Obama sees a different America and thinks he could win another term, if it was allowed.

“I’m confident that if I had run again and articulated it, I think I could’ve mobilized a majority of the American people to rally behind it,” Obama said. 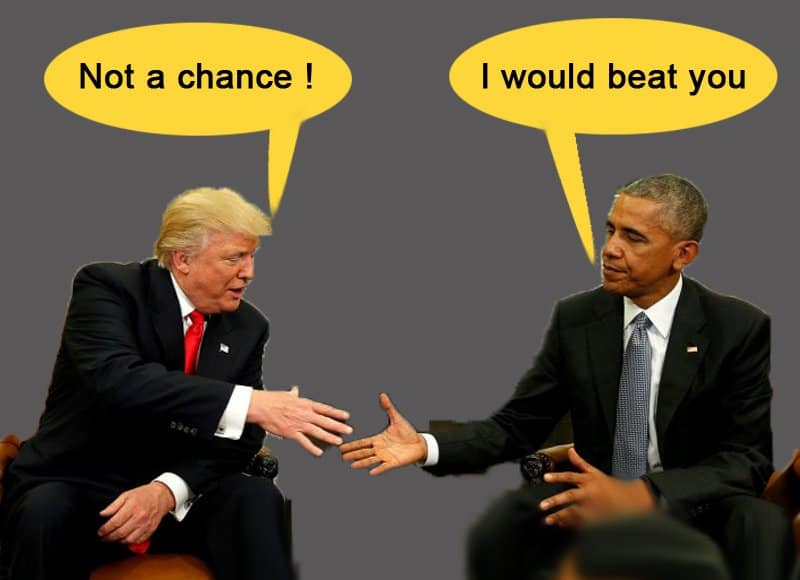 Great, four more years of economic and immigration destruction. At least Obama could have cleaned up his own Obamacare mess, possibly by printing more money and pushing the pain forward four more years.

Speaking with David Axelrod, Obama says people have told him his vision and direction were right. Those people probably own factories in Mexico. Obama’s “right direction” is towards higher taxes, more money printing and more industry moving to other countries.

“I know that in conversations that I’ve had with people around the country, even some people who disagreed with me, they would say the vision, the direction that you point towards is the right one,” Obama said.

This makes me think of conservative Margaret Thatcher, back in 1976, who said “Socialist governments traditionally do make a financial mess. They always run out of other people’s money. It’s quite a characteristic of them.”

Over eight years, Obama completely ignored millions of Americans while pushing his own agenda. He even ignored black people (his people) in the cities and suburbs. Even Louis Farakkhan was disappointed by Obama’s performance. Promoting blacks in the White House and at high levels throughout the government was as much as Obama could manage. This is part of the reason black people did not turn out in massive numbers for Hillary Clinton. Obama did nothing for them, and they didn’t want more of the same. Black conservatives gained in strength.

Donald Trump didn’t believe what Obama said, either. He tweeted in 136 characters “President Obama said that he thinks he would have won against me. He should say that but I say NO WAY! – jobs leaving, ISIS, OCare, etc.”

President Obama said that he thinks he would have won against me. He should say that but I say NO WAY! – jobs leaving, ISIS, OCare, etc.

Yes, Obama started and ignored more wars than George W. Bush did, and he strengthened the murderous Iranian mullahs. And the Nobel committee awarded him the Nobel Peace Price for talking about preventing war. Perhaps killing civilians with drones from afar isn’t counted as war.

As should be expected, Obama blamed Hillary Clinton’s loss on “a double standard.” This apparently means that the media was too tough on her, but that’s not the way anyone else remembers the media’s hammering of Trump and their soft-pedal on Hillary. Until the very end, that is, when her problems finally became too big for them to ignore. Obama has a very different viewpoint, and it doesn’t line up with reality.

Obama said Democrats did not abandon blue-collar workers in the middle of the country whose jobs disappeared when his Administration helped shut down their industries or stood by when they moved overseas. Obviously working-class Americans had a different view, especially when illegal aliens got more attention than they did.

Harking back to his offer to coach Democrats last week, Obama said Democrat politicians did not communicate a message to the working class. He didn’t say they had a positive story, but that they should have communicated “we understand why they’re frustrated.” He also didn’t say they would ever do anything about it.

That is why Hillary lost the election. It is also why Obama would not have been a shoo-in for another term.

Editor’s Note: It is often said that Margaret Thatcher said “The problem with socialism is that eventually, you run out of other people’s money.” It is possible she did say that at some time, but I have not been able to discover a direct quote of her saying those words. What she did say is shown in paragraph nine, above.