NewsBlaze News
Home Thoughts Opinions Deep Purple’s ‘Now What?!’ Is a History That Is Both Contemporary and...

Deep Purple’s just released their 19th studio album, ‘Now What?!,’ produced by Bob Ezrin in Nashville, which proves this ’70s progressive rock band are not HASBEENs! Or if they are of this sort, Purple’s done a good job of bringing their sound back to life; that is, they and it (their sound) are not dead.

Is ‘Hell To Pay’ the next ‘Smoke On the Water’? I believe it is! What we have, is Deep Purple reflecting back on a fruitful, yet troubled career, redefining it, yea, staying current, and really just surviving. Survival is the key to refinement, which is what we’re getting from DP (in 2013).

‘Weirdistan,’ the best constructed song here, defines what I just stated in lyrics and music; they pay homage to the past, while making it something new, using familiar building blocks of guitar and keyboards. 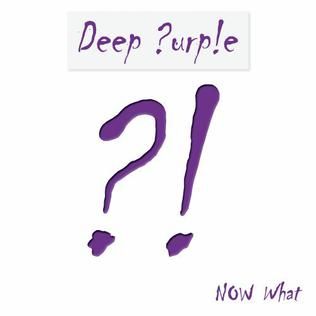 Don Airey’s playing (or his technique) reminds me more of Rick Wakeman’s than is does Jon Lord’s. This is not a negative; how many keyboard players can get a guttural bottom end (which influenced the metal aficionados across the board) sound, such as Jon Lord? Right, no one!

‘Weirdistan’s opening guitar riff by Steve Morse reminds me more of Yes’ Steve Howe than it does the incredible delivery of Ritchie Blackmore. Overall, the song sounds more like vintage Yes then it does vintage Purple, which is something to contemplate.

Well, the Mark VIII lineup (don’t ask me to diagram the undulating lineage) is very different too, you might notice, but still? One line of of Ian in a codified way, summarizes the current philosophical state of the ‘Purple Legacy’: “No questions of guilt it seems like we’re just out of sync.”

We appreciate Ian’s honesty; ’70s dinosaurs are contemporary by just admitting who they are. I’m a bit up there myself and used the occasion of the release of ‘Now What?!’ to study the band’s long and winding path from their origins (‘Shades of Deep Purple’, 1968), as well as an attempt to recall my own interaction with Purple, which dates back to ‘In Rock,’ as best I can recall.

We’d gather at a friend’s house (’round about 1972), who had a Primo Stereo set up; you know the drill, aluminum foil sealed windows, black lights with Day-Glo Rock Star posters, incense aroma burning, water beds, bongs the size of the Trojan Horse passing prodigiously, with the wondrous, Metal Baroque riffs of DP tickling our anxious ear-cones!

This is real, not a synthetic memory; this friend (who I won’t identify here) was a Deep Purple fanatic (a Bleedin’ DP Freak!), and a lot of it rubbed off on me. After studying their history last weekend a good deal of it was coming back to me. I must confess, I stopped following The Purple Machine about 1976; this is not to say they weren’t still making some great music, I just never heard it.

On Sunday, I dropped by Waterloo Records in order to get a gander at DP’s robust catalogue. Had ‘Machine Head’ on vinyl! Been wearing it out since then, accompanied with my listening of the new one. Playing them in tangent will help you tremendously!

I believe I’ve nailed it; what defines the origins of ‘metallurgy’ is the miraculous interplay between Jon Lord’s thunderous organ and the handy-dandy, jet-engine speed riffs of Ritchie Blackmore, who burned to a tragic crisp by 1993 (don’t worry, his legacy is completely in tact)! ‘Highway Star’ and ‘Smoke’ both showcase this revolutionary development, that carries over to so many metal bands, who need worship at the cantankerous altar of an ever scrappy DP. I don’t digress, ‘Hell To Pay’ carries the rattling baton onward from the lofty zenith of ‘Machine Head.’

Oddly enough, my favorite song is ‘Vincent Price,’ which some music critics have described as filler; anything but! Phantom of the opera organ, Black Sabbath minor guitar bends, cinematic lyrics, great interlude solos, guitar acrobatics with organ fused lightly in the background. The last tune may end up being the keeper; perfect fit for Bacchanalian Halloween parties all across the world.

Now What?! deserves to chart; young people ought to do what I did (as they analyze the record), research DP’s rich history on the Wikipedia page, study their copious discography, then try to come to terms with their deserved place in Rock’s tumultuous (and still undefined) timeline. The Rock and Roll Hall of Fame must be just around the corner!